What is carb cycling keto? 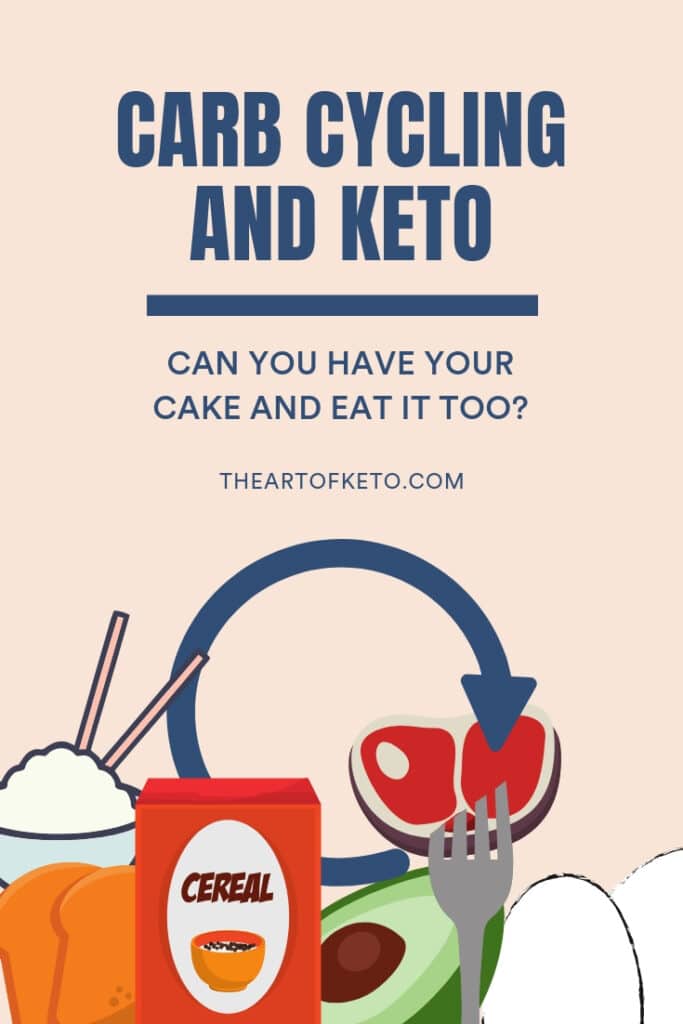 A few questions you may be thinking…

Is it the same as carb cycling?

In short, no… while a cyclical ketogenic diet does combine aspects of cycling carbs on a keto diet it isn’t the same as what most people refer to as “carb cycling.”

A typical carb cycling approach would alternate between low, medium, and high days throughout the week while a cyclical ketogenic approach would have 5 – 6 consecutive low to no carbohydrate days followed by a massive influx of carbohydrates on 1 – 2 days.

Who should use a cyclical ketogenic diet?

If you’ve been successfully following a ketogenic diet but noticing a decrease in performance, giving a cyclical ketogenic diet a run through may be an option worth considering.

On the flip side, if you’re on the fence about starting a ketogenic diet but have been worried about a drop in performance or muscle loss, a cyclical ketogenic diet may be the answer.

Carb cycling on keto or a cyclical ketogenic diet can be used by individuals both looking to lose weight and/or gain muscle. That said, I don’t recommend this method of carb cycling on keto for beginning exercisers. For the diet to work optimally, it will usually require a fairly large amount of training (resistance training).

When I first stumbled upon a ketogenic diet, I was already in the military in the early 2000s. I was fairly active as you might already assume with my normal military duties, mandatory physical training, and lifting weights on my own free time.

That said, I was beginning to notice a dip in performance in the gym. This eventually led me to seek answers where I stumbled upon cyclical ketogenic dieting.

Back in the hay day, there weren’t very many blogs, no social media, even google didn’t exist. Somehow, I stumbled upon a low carb chat forum where I ran into an individual by the name of Lyle McDonald who was journaling about his progress during a diet called Body Opus, a variation of a CKD.

While Body Opus was an extreme version of the diet, I noticed excellent results and have been tinkering with the method to suit my goals ever since.

Why combine keto and carb cycling at all?

On the surface, cycling carbs on keto sounds like a way to have your cake and eat it too. The main goal of a CKD is to allow you to sustain high-intensity performance in the gym week after week.

Maintaining or even increasing performance is required to gain muscle, or at the very least, maintain it while attempting to lose weight.

Our bodies are constantly undergoing periods of catabolism (breaking down) and anabolism (building up).  In other words, to build muscle requires protein synthesis (anabolism) to be greater than protein breakdown (catabolism).

Before attempting to implement a carb cycling keto variation such as a cyclical ketogenic diet, it is recommended that you become fat adapted using a more standard ketogenic diet. The idea here is to get your body accustomed to utilizing fat for fuel (ketones), especially if coming from a standard carbohydrate-based diet.

A good rule of thumb is to use standard ketogenic diet for at minimum 3 to 4 weeks before attempting to combine keto and carb cycling.

For individuals such as physique athletes who might prefer a ketogenic lifestyle, but also want to maintain, even gain muscle and performance, a cyclical ketogenic approach is a viable option.

In layman’s terms, the carb load is essentially to fuel performance for the upcoming week before the next high carb day or days come around.

Therefore, our main goal with keto carb cycling or a Cyclical Ketogenic Diet is to refill muscle glycogen periodically, ensuring enough glycogen (energy) is available to maintain strength and performance. 2Muscle glycogen is the stored sugar/carbohydrates within our muscles.

Unlike a targeted ketogenic diet (TKD) where you might typically consume a small amount of carbs before and after workouts, our goal with a cyclical ketogenic diet is to deplete muscle glycogen completely 3Ok, maybe not COMPLETELY… though to a certain level before the next high carb day or days.

It’s for the reason mentioned above, a cyclical ketogenic diet isn’t typically recommended for beginning exercisers or those that are. fairly new to resistance training. Muscle glycogen must be depleted to a certain level between the periods of eating a standard keto diet and the days of higher carb intake, and this can only be accomplished by heavy resistance training.

It goes without saying, but your body will temporarily be switched out of a state of ketosis during these days that you eat carbs.

This is the primary reason I recommend becoming keto or fat adapted prior to trying such a protocol. <br> I have observed in myself as well as others that have undergone ketogenic diets for prolonged periods of time that it’s possible to remain in a state of ketosis even after ingesting upwards of ~700-800g of carbs (IN A DAY)… or at the very least get back into ketosis shortly after the carb load.

When carb cycling on keto, the diet is broken down into two phases.

There’s no reason you can’t play around with more standard keto diet days or longer carb loads, it just makes it more convenient to fit within your standard 7 day week.

The goal with the standard ketogenic diet phase is to keep insulin low, deplete muscle glycogen, and set ourselves up to make the most out of the upcoming carbohydrate feast. During these days, carbohydrate intake should be kept as low as possible < ~5 – 10% while filling the rest of your calories with protein and fat.

If you need help calculating your macros based on your specific goals, head over to my keto macro calculator to get a good starting point.

Ideally, your diet might look like 5-10% of calories from carbohydrates, 15-35% from protein, and 55-75% from fat for 5-6 days a week. Your protein and fat percentages will vary depending on preference, but I would suggest a minimum of at least 1g per pound of lean body mass. 4lean body mass = total body weight – fat weight</a>

That said, I personally prefer a higher protein intake and have no problems establishing and maintaining ketosis with 1.2 – 1.5g per pound of lean body mass.  I also suggest keeping carbohydrate intake to less than < 30g total since you will only be in a state of ketosis for a few days out of the week.

Sample foods to eat during the standard ketogenic phase

The following is just an example of foods to eat during the standard ketogenic diet phase. For a more complete list, you can head over to my keto diet foods list.

During the carb load phase, you will be eating almost the opposite of how you ate during the standard keto diet phase. As the name implies, we will be emphasizing carbs… and A LOT of them while keeping fat relatively low and protein stable.

Sample foods to eat during the high carb day(s)

* We want mainly carbs in the form of glucose, but small amounts of fructose is acceptable. Remember, we want foods that are generally high carb, but low in fat.

Sample workouts on a CKD

If you don’t feel like you want to die after this workout then you didn’t push hard enough 😉 That said, it may also be a good idea to use machine equivalents as it is easy to adjust weights…  that and you don’t run the risk of crushing yourself with free weights.

A few things to keep in mind before the carb load

Pros, cons, and some helpful tips of a carb cycling ketogenic approach

Unfortunately, when it comes to carb cycling on keto or even a standard ketogenic diet, there have been no studies that I’ve seen that offer any insight into the implications of utilizing either approach.

That said, there are plenty of anecdotes of individuals online that have been living an uninterrupted ketogenic lifestyle for 15-25+ years with no adverse effects.

A cyclic approach to a ketogenic diet can be a compromise for those who prefer a ketogenic diet but may have experienced a decrease in performance and wish to experiment with strategically adding in carbohydrates.

You may also want to give my article on How to gain muscle on a ketogenic diet a read if you are struggling to put something together.

On the flip side, if you’ve never tried a ketogenic approach and wish to try a CKD, allow your body to become “keto-adapted” for 3-4 weeks prior to experimenting with the protocol.

If you allow yourself to become keto-adapted prior to starting and do everything to a T, you may very well find that even with a large influx of carbs you can remain in ketosis.

If you have any questions feel free to leave a comment down below.

Can I carb cycle on keto?

Yes, depending on your goals you can most definitely carb cycle on keto. The best way to know is by experimenting and finding out what works for you

Do you need to carb up on keto?

You don’t NEED to carb up on keto.

Is keto or carb cycling better?

One is not inherently better than the other, but why not have the best of both worlds and try a cyclical ketogenic diet.

How often should I carb cycle on keto?

How often you carb cycle on keto will depend on how long you’ve been dieting, your training volume, and how well you tolerate them.

Is carb cycling and cyclical keto the same?

How many carbs are allowed in keto diet?

In a standard keto diet it is recommended to stay under 30 net carbs.

Should you refeed on keto?

Whether or not to refeed on keto is a personal preference that you have to experiment with.