I got a question the other day on Instagram. The person asked me “how much water should I drink on keto.”

At first, the old adage of how many cups to drink per day came to mind. How many of you remember the old saying of drink 8 cups of water a day anyhow?

I mean really… what does that even mean?

How big of a cup are you supposed to use?

I won’t lie… I still don’t know what “8 cups” is supposed to translate to.

This will have most individuals drinking between 0.5 to 1 gallon of water per day. 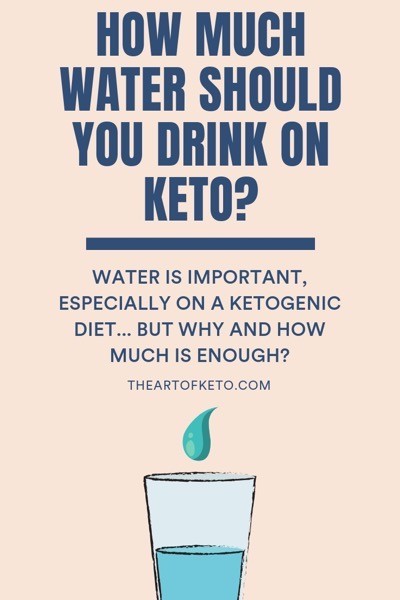 Often times, many of the unwanted side effects of someone first starting a ketogenic diet is due to dehydration, being deficient in electrolytes (sodium, potassium, and magnesium), or both.

Having said that, let’s get into why it may be of more importance to be mindful of your water intake on a ketogenic diet.

Glycogen is just another fancy word for stored carbohydrates both in our liver and our muscles.

On a standard ketogenic diet, you’re usually limiting your carbohydrate intake to no more than 10% of your total calories, and thus, less glycogen is being stored in general.

For every gram of carbohydrate aka glycogen that your body stores, you will also store 3 grams of water along with it.

On average, your body (muscle and liver) can store 600g of glycogen. This means that along with the glycogen comes close to 1,800g of water or close to 4lbs for us U.S. based folk.

This explains why you might experience a sudden loss of weight and increased urination during the first week of transitioning to a ketogenic diet.

While some of that weight is fat, I hate to burst your bubble… but a lot of it was likely water weight.

Ketones appear to have a diuretic effect

While not conclusive, it does appear that the presence of ketones may also play a role in water and sodium excretion.

Additionally, ketones appear to have a diuretic effect themselves causing the excretion of water and electrolytes. This includes the excretion of sodium, which itself causes water retention.

Those switching to a ketogenic diet, at least MOST people, often times start to make healthier choices when it comes to food selection. Many people make the switch from sodium filled packaged foods to eating unprocessed whole foods.

A switch from pre-packaged foods to unprocessed foods often leads to a substantial drop in sodium intake, and less sodium means less water is retained.

Not drinking enough water on keto may lead to

Now that we’ve gone over why you should be a little more mindful of your sodium AND water intake let’s go over a few things you may experience if you’re lacking.

Goes without saying, but insufficient water intake can lead to mild dehydration.

Signs of mild dehydration include: 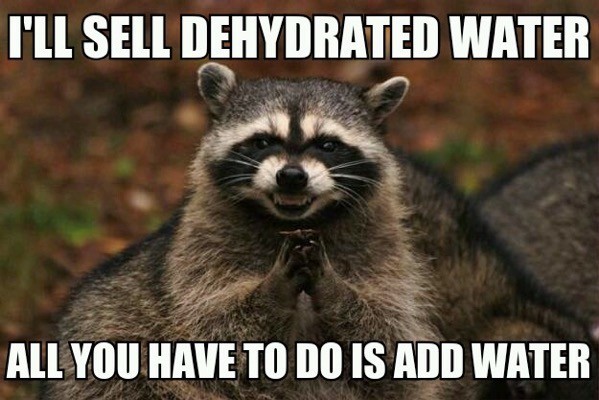 Ever heard of (or maybe experienced) the dreaded keto flu?

A lot of the signs and symptoms associated with the keto flu stem from the loss of fluids and electrolytes.

Have you experienced lightheadedness going from seated to a standing position?

Then you may be experiencing bouts of low blood pressure, which is another symptom you may not be drinking enough water on keto.

Ways of staying hydrated on keto

Here are 3 useful ways of increasing your water and/or electrolyte intake on a ketogenic diet.

Keto lemon water is what you think it is. For those that just can’t stand drinking plain water, I find that lemon water is an excellent alternative for these individuals.

Lemon water is the most simple thing in the world to make. All you need is a jug of water and 2 to 3 lemon slices, and you’re good to go.

Preferably leave the lemons soaking in the water overnight and enjoy your lemon water the next day. You may also substitute limes for the lemon.

Sole water aka salt water is popular on a keto diet

I was first introduced to sole (pronounced solay) water a couple years ago.

Much like lemon water, instead of lemons, you’re saturating the water with a natural salt which is rich in minerals.

Remember, salt is not as evil as it has been made out to be… and we actually want to be adding salt in most cases when switching to a ketogenic diet.

For a good read on salt intake and why it’s so important, I would recommend giving the book The Salt Fix a read. 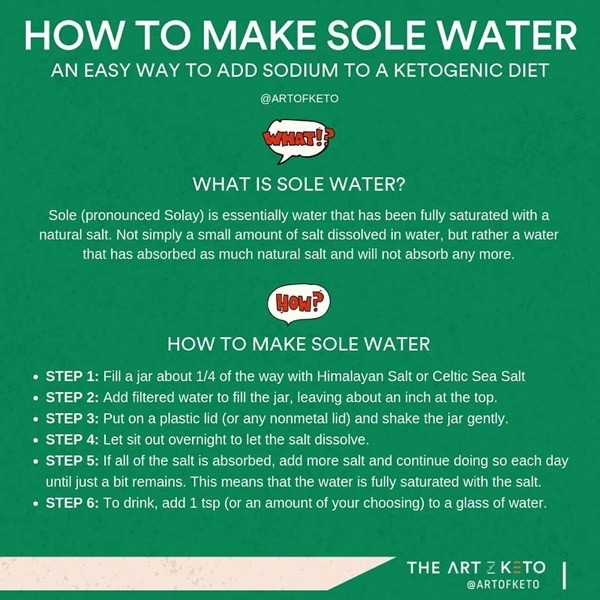 I don’t know what it is, maybe it’s the carbonation… but when I’m tired of drinking plain water, I simply reach for sparkling water (non-sweetened of course).

And perhaps the occasional diet soda.

A little about water intake, body weight, and weight loss.

Earlier above, I mentioned that a lot of the initial weight loss on a ketogenic diet within the first week or two is due to a rapid loss of water.

But aren’t the two the same thing?

Your weight is made up of both lean mass (muscle, bones, organs, etc.) and fat mass. In reality, you’re after maintaining as much lean mass while losing as much fat mass as possible.

So while the scale may play tricks on you from day to day, just remember as long as the scale is trending in the right direction, and you’re looking better in the mirror or progress photos, then you’re on the right track.

Can you drink too much water?

While it’s rare to do so, it is possible to drink too much water.

There is usually no need to drink anything upwards of 2+ gallons per day. Personally, I fall somewhere between 1 – 2 gallons per day, but I am also highly active and sweat a lot.

Here are a few drawbacks to drinking “too much” water.

Reduced ketones in the urine

While not really a drawback per se. If you’re using keto urine strips to test for ketones, you may notice very little or no ketones at all showing up.

This is likely due to the ketones being diluted to the point where it is not being picked up by the pee strips.

First, if testing your ketones is essential, I would probably opt for a blood ketone meter instead.

Second, ask yourself if you’re more interested in seeing results or seeing a high ketone reading.

Much like drinking too much water can dilute ketones in the urine, it also can dilute and flush out electrolytes and potentially be fatal.

Over-hydration can lead to salt and other vital keto electrolytes becoming diluted and unbalanced, resulting in feelings of sickness and possibly death.

The only cases I’ve heard of people dying from over-hydration were people who over hydrated and didn’t take in enough electrolytes during extreme events such as a marathon or ultra marathon.

Summing up how much water to drink on keto

How much water YOU should drink depends on your body and lifestyle factors, such as how much you exercise, whether you’re a heavy sweater, etc.

A good rule of thumb is to aim for 5 clear urinations throughout the day, not just 5 urinations total.

This usually leaves most people with drinking somewhere in the ballpark of 0.5 to 1 gallon of water per day.

Other beverages such as coffee and tea can be included in this total.

This may sound like a lot of water, especially if you don’t drink that much currently. You would be surprised and how easily you will get used to drinking this amount in no time.