Lazy keto (or dirty keto) is often a term thrown out there in the keto community, but what exactly is it? Everyone has their own definition, myself included.

While I think most others tend to agree with one another on the meaning, I think I am an outlier on my approach. After all, I've been in this game for nearly 20 years and I think I may have learned a thing or two about getting results.

… but of course, I always keep an open mind and look to expand my knowledge. As the saying goes …

What gets measured gets managed

But does this apply to your weight loss and diet?

What is lazy keto?

Lazy keto is when the only measurable factor of your ketogenic diet is keeping your carbohydrates under a certain amount, usually around 20g or less.

To expand lazy keto a bit more, it’s eating “keto-friendly” foods ad libitum. 1Basically as much as you want.

But is this method of keto ideal? I’ll admit, It can work for many, but will it work for you?

Let’s dive into who lazy keto might work for, when “strict” keto may be more appropriate, and some best strategies moving forward shall we? 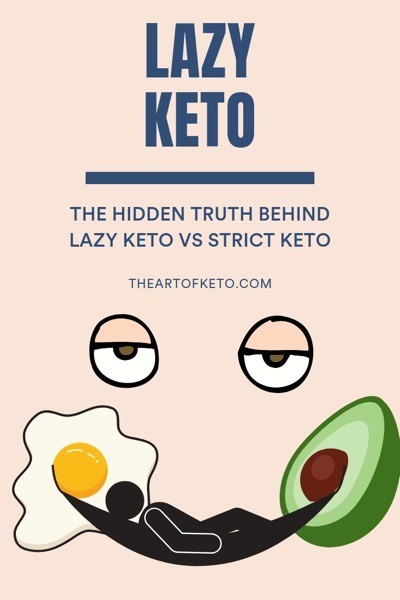 One major hurdle most beginners face when starting a ketogenic diet is over analyzing everything. I often ask individuals what’s stopping them from getting started on their diet and usually the response is something like…

I’m getting ready to start, but I want to get all the information before doing so.

Inevitably, half or more of those same individuals likely haven’t started their ketogenic lifestyle to this day. If you’re waiting for the right time or until you have all the information, then you’ve waited too long.

And for these individuals, lazy keto might be a great tool. Why? Because it will help them to   just START,  but with one caveat.

Knowing which foods to stay away from. 2Knowing general food composition, i.e. which carbohydrate-rich foods are rich in carbohydrates.

Why it’s so complicated

Most people have it wrong, even the “gurus”

At the foundation of establishing and maintaining a state of ketosis is low to no carbohydrates.

Meaning, the ONLY pre-requisite to getting into ketosis is limiting your carbohydrates.

Yup, that is the ONLY requirement.

Percentages for a ketogenic diet were originally laid out as a guideline for individuals who suffered from epilepsy to keep ketone levels high. 3And this usually means keeping protein low to moderate and a relatively high fat intake.

If you suffer from epilepsy or another neurodegenerative disorder, then stick to the percentages. 4But I’d also imagine you’d be under the guidance of a qualified doctor.

If you’re after losing weight and looking good naked, throw those percentages out the door, we’re not concerned with them.

We can worry about dialing in macros once you get started. And even these will be based on YOUR weight, not a random percentage.

#1 It requires you eat to satiety

Let’s face it, most people don’t know when they’re “really” full. It’s part of the reason most of us are trying to lose weight.

Combined with the fact we eat not only out of hunger. We are social and emotional beings… and we eat because:

The only requirement to establish ketosis is restricting carbohydrate-rich foods, but most people don’t possess certain fundamental skills when starting a ketogenic diet.

Most people don’t know which foods contain what macronutrients (protein, fats, and carbohydrates), what a portion size really looks like, and how much food they need to eat.

… But if you do, then you’re ahead of the game!

Sometimes lazy keto is a good idea, but only once you’ve mastered the basics and have the swing of things.

#3 What happens when you stop losing weight?

If you haven’t achieved your goal look, weight, body fat percentage, [insert metric you are aiming for], and you implement lazy keto, what do you do when you inevitably stall?

Because IT WILL happen.

Now you have nothing to look back upon or manipulate because…

You’ve been lazy keto’ing it up.

If you’ve hit your goal and want to take your break off the gas and do a version of lazy keto, then, by all means, you’ve earned it! 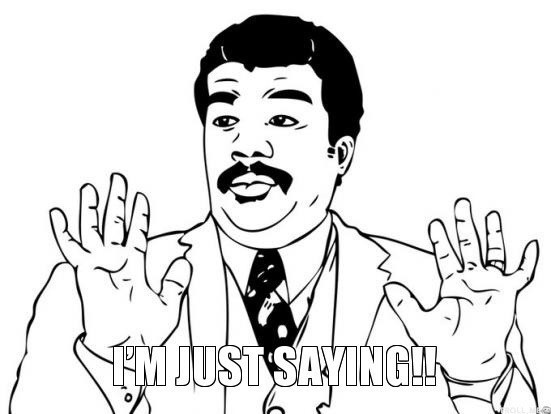 If you hit your goal and want to just take it easy, then keep doing what you’re doing.

If you’re still in pursuit of your goal and thinking if you should just do “lazy keto” then here’s what I think you may want to consider.

It is of my opinion that to  successfully implement lazy keto to manipulate body composition  5to lose fat and/or gain muscle one must generally know a few things:

So while I don’t think it’s 100% necessary to weigh and track your foods, I think it is a great skill to acquire.

I recommend people track their food intake, if at least for a few weeks (3-4 weeks) to get the hang of things. This will allow you to learn what’s in certain foods, and have a good idea about what a portion size really looks like.

Maybe then you can lazy keto it up.

So what should you do? Lazy keto or strict keto?

To me, lazy keto is just eating what you want when you want without tracking.

So long as your carbs are low that is.

Strict keto is when you’re tracking what you’re eating and making adjustments based on the feedback you’re receiving (weight, pictures, how clothes fit, your energy, etc.)

How do you know which method is for you?

It all boils down to your current starting point and what your goals are.

Depending on how much weight you want to lose and how lean you want to get will dictate how much it will “cost” you. When I say cost, it’s because different levels of leanness will cost you certain things.

Now, it’s a matter of asking yourself if the cost is too high for what  you think you want  as the result.

i.e. Is the tradeoff of getting super shredded worth the effort?

Basically, the leaner you wish to be, the more trade-offs you must be willing to make. The methods you used to get the first ’10 pounds’ won't be the same methods it will take to lose the last ’10 pounds.’

Here’s how I would categorize different levels and who lazy keto vs. strict keto would be good for. 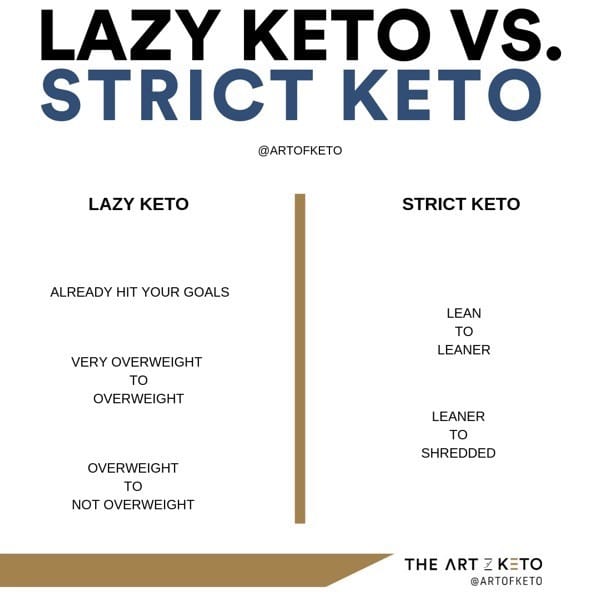 Trying to get from:

Lazy keto can work, and it has for many individuals. A ketogenic diet has a lot of benefits that make it easier for the dieter to maintain a caloric deficit and thus lose weight.

Studies even show that when putting participants on a ketogenic diet and told to eat ad libitum, they lost weight. Basically, they could eat however much they wanted as long as they restricted carbohydrates and lost weight without tracking.

Why lazy keto can work

3 people who should not use lazy keto

While lazy keto might work for anyone, there are people I would NOT recommend it to.

#1 You do not understand what a macronutrient is

If you have no idea what a macronutrient is, you also probably don’t have a firm grasp of what foods you should and shouldn’t eat to establish and maintain a state of ketosis.

First, learn the fundamentals of calories and macros. Second, track your diet using an app like MyFitnessPal to get a hang of things and learn about what’s in different foods you enjoy.

Last, give my keto foods list a read to have a general idea of what to eat and what not to eat on a ketogenic diet.

Again, there is a ‘cost’ to getting lean. If you are looking to get lean or even VERY lean, you have to make the tradeoff of being a little more strict with your diet.

If you’re trying to see your abs for the very first time since you were five or look like the cover model of a fitness magazine, you best believe you need to be strict with your diet.

Sometimes lazy keto is just a bad idea for those of us who seem to want to eat any and everything, myself included. If I didn’t track what I ate, then I would almost inevitably gain weight.

Tracking for me is an accountability tool. It’s also a great way to make adjustments when things hit a plateau. It’s so easy once you’ve been doing it awhile that it becomes second nature.

There is even a study that shows that keeping a food diary can double a person’s weight loss.6Keeping A Food Diary Doubles Diet Weight Loss, Study Suggests

Even if you choose the lazy keto route, I would be mindful to make ‘sensible’ decisions with food choices.

Don’t look to “ketofy” all your old comfort foods. Instead, stick to whole nutrient-dense foods and you can definitely get away with doing lazy keto.

Breakfast staple: Bacon, eggs, and half an avocado

Do you think there would be something else for breakfast besides some bacon and eggs? Just don’t go crazy on the bacon.

While I recommend sticking to grass-fed beef, ground beef is more cost effective and easy to toss in a pan and stir-fry for a quick meal.

Can’t get any more simple than that.

If you want to get a little fancier, blend up the cauliflower rice with grass-fed butter and a splash of heavy whipping cream for caulimash.

Dinner staple: Ribeye (or other protein) and veggies

Ribeye is my favorite cut of beef, but you can have whatever cut of beef or other protein (pork, chicken, fish) you fancy. Pair your protein with a side of veggies and you’re good to go.

There also might be a glass of wine next to my plate now and then.

So technically these aren’t recipes, but if lazy keto is really what you’re looking for then why are you looking to complicate things?

These meals are really an example of how simple I make it. I’ll save all those
fancy keto recipes for special occasions or once in a while treats.

Not only will you save time, but it’s one less thing for you to have to worry or think about.

If you want to make life even more simple, I would suggest choosing one or two days and meal prepping for the upcoming few days.

What I like to do is pan fry a bunch of ground beef, oven roast different veggies, and hard-boil tons of eggs to have 3 to 4 days' worth. I simply toss them in Tupperware and pull them out when it’s time to eat.

Lazy keto meal prep pays for itself in saving you time and money in the long run. It’s also convenient for those times when someone or something tempts you to eat off plan due to being tired, super lazy, or perhaps a little tipsy…

Just a small example of a simple lazy keto food list you could stick to.

Lazy keto is definitely a viable option for you if you have a basic fundamental understanding of what to eat and what to avoid.

For many, lazy keto is something they end up switching to once they’ve hit their goals or want to take their foot off the gas pedal before returning to a more strict keto approach.

If lazy keto is something you want to try, I believe the more simple your food choices, the higher likelihood that a lazy keto approach can be effective without tracking every bite you put in your mouth.

In the end, it will come down to your goals.

Just remember, the more ambitious your goal the more trade-offs you have to make.

Do you do lazy Keto? Why or why not? Let me know in the comments down below.