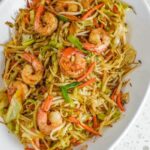 I was browsing the Asian grocery store the other day, and I came across a vegetable that I used to eat a lot growing up. Naturally, I wondered if this nutritious and inexpensive vegetable, bean sprouts, was “keto-friendly,” and here’s what I found.

Bean sprouts have 4 grams of net carbs for a 1-cup serving, making them a perfect vegetable choice while following a keto diet. Bean sprouts are a great way to add more food volume for satiety and almost an essential ingredient in many Asian dishes, keto or otherwise.

If you were ever to visit an Asian grocery store you would be able to buy bean sprouts in enormous bags for very cheap!

In this article, I’ll go over the most common types of bean sprouts, how many carbs they have, the health benefits, and some keto-friendly recipes you may want to give a try.

You may be standing there in the grocery store right now, just like I was, and stumbled across this article. You’re asking yourself, can I have bean sprouts on a keto diet?

And you’ll be glad to know that you can enjoy bean sprouts while following a ketogenic diet.

Similar to other vegetables, bean sprouts are primarily made up of water, and a third of the carbohydrates are from dietary fiber.

Mung bean sprouts are probably the most common bean sprout, which is derived from…. Can you guess?

Mung beans! Bet you didn’t see that one coming.

How Many Carbs In Bean Sprouts

Bean sprouts are quite low in carbohydrates relative to the amount you get to eat!

There are 6 grams of carbs in 1 cup of bean sprouts, with 2 grams coming from dietary fiber, leaving only 4 grams of net carbs per cup.  1https://nutritiondata.self.com/facts/custom/509870/2

Most individuals following a ketogenic diet are eating anywhere between 20 to 50 grams of net carbs per day.

Not only will a cup or two of bean sprouts be a great source of nutrition, but it will offer a good amount of food volume for minimal net carbs, making it great for satiety. 2https://www.ncbi.nlm.nih.gov/pubmed/26810925

While mung bean sprouts are the ones you’re likely to encounter in Asian dishes and grocery stores, you may be wondering what other bean sprouts there are.

First, out of all the other bean sprout varieties, mung bean offers the lowest amount of carbohydrates.

While there are almost a dozen varieties, only two other ones make it remotely close to being keto-friendly.

Unless you’re sprouting the kidney beans yourself, there’s not a high likelihood you’ll ever come across them. However, soybean sprouts are commonly used in Asian dishes, especially in Korean cuisine.

Bean sprouts were thought to have been native to India but later spread to China and parts of southeast Asia.

Additionally, sprouting the mung bean to produce the sprouts boosted the vitamin C content upwards of 24 times after seven days of germination. 3https://www.ncbi.nlm.nih.gov/pubmed/23088738

Soybean sprouts are a great way to add a bit of a crunch with a nutty taste to your keto dishes.

The sprouting of soybeans reduces levels of physic acid, which is considered an antinutrient.

Antinutrients are compounds found in plants that reduce your body’s ability to absorb certain essential nutrients like iron, making it less available for your body to use.

If you’re looking for different ways to incorporate bean sprouts into your ketogenic diet, here are a few ideas to get you going.

This recipe uses chicken, but feel free to use beef or any other meat of your choosing. Heck, you can even make this vegetarian-friendly and omit the meat altogether.

A quick blanch of the bean sprouts, then tossed with a mix of seasonings make for a great bean sprout salad.

Feel free to add a little bit of fish sauce and sugar-free sweetener of your choice for a more Vietnamese inspired flavor.

Photo and recipe courtesy of I Heart Umami

Being Filipino, these are more of the flavors I was accustomed to growing up. You can think of this dish as a noodle’ less’ pancit.

Mung bean sprouts and soybean sprouts are keto friendly vegetables that offer few carbs, but a lot of volume (bulk) making them perfect for adding to your ketogenic diet.

Not only are bean sprouts nutritious, but they are versatile and can be added to almost any dish or eaten on its own.