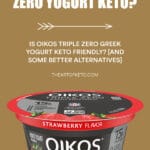 One of my favorite foods to eat, keto diet or not, is Greek yogurt. If you browse the yogurt section, you'll see many varieties, but which one is ideal on a ketogenic diet? Mainly, is Oikos Greek yogurt keto-friendly?

Oikos triple zero is not an ideal choice for Greek yogurt on a keto diet. Triple zero yogurt ranges between 10 and 14 grams of net carbs and 100 to 120 calories per cup. This amount of carbs make Oikos not ideal for most individuals unless eaten in moderation or reduced serving size.

In this article, I'll cover why or how you possibly could still eat Oikos triple zero Greek, how many carbs are in each flavor, what it's made of, and then better alternatives for those on a ketogenic diet.

Can You Eat Oikos Greek Yogurt On Keto

As the intro alluded to, it's not suggested that you eat Oikos Triple Zero Greek while following a keto diet. The reason being, one cup already contains between 10 and 14 grams of net carbs, and many individuals only have a carbohydrate intake of 20 to 50 grams per day to play with.

You can think of your carb allotment as a budget that you get to spend each day. While you could potentially fit in a cup of Oikos triple zero Greek, sometimes those carbs are better spent on more filling and nutrient-dense sources such as vegetables.

Therefore, you could potentially fit in a cup of Oikos once in a while but shouldn't make it a habit of doing so.

With most foods on a ketogenic diet, the poison is in the dose or quantity consumed. Eating the yogurt itself, or even refined table sugar, will not inherently kick you out of ketosis, but eating too many carbs total throughout the day will.

Besides, who said you had to eat the entire cup? Half the cup means half the carbs per serving.

How Many Carbs Are In Oikos Triple Zero

Most Dannon Oikos Greek flavors have ten carbs per serving, with a few of the flavors containing 14 net carbs per serving. On the other hand, every cup contains 0 grams of fat and 15 grams of protein, regardless of flavor.

Below is a chart of all the different flavors and their carbs count per cup (150 grams).

As you can see, all of the flavors except for coconut cream, peach, and strawberry have 10 grams of net carbs.

Is all yogurt low carb?

As a whole, plain yogurt will tend to have more carbohydrates than unsweetened Greek yogurt, the most keto friendly option, and that's because regular is made by straining it twice while Greek is strained three times. This additional straining process is what removes some of the carbohydrates and gives Greek yogurt its thicker consistency.

However, certain Greek yogurt brands have different straining processes that remove even more of the sugars naturally found in dairy, leaving fewer carbohydrates as a result.

I'll get into a few of those brands down below.

If you're wondering what exactly goes into Oikos, I've listed the ingredients below.

As a whole, the ingredients are simple and straightforward. Chicory root fiber is keto-friendly for those concerned. It is used primarily as a thickener along with lactic acid for the non-fat milk, and the lemon juice concentrate is for added flavor and preservation.

The milk comes from non-GMO dairy, and each cup has no high fructose corn syrup or added sugars. A bonus is the vitamin D3, which nearly half the global population is deficient in. 1https://www.ncbi.nlm.nih.gov/books/NBK532266/

Lastly, all yogurt is made with active cultures to aid in the fermentation process.

Is Oikos Triple Zero Good For You?

When it comes to weight loss, Greek yogurt can provide some health benefits.

Protein is known to be one of the most satiating nutrients and is associated with feelings of fullness. 2https://www.ncbi.nlm.nih.gov/pubmed/7498104

For those looking to lose weight, foods high in protein or known to be satiating are a big plus. One of the many reasons people quit their efforts is simply because of hunger.

By including foods such as Greek yogurt, you are not only consuming muscle-building protein but eating food that may help with appetite control, which leads to successfully sticking to your diet. Intake of adequate protein while dieting is essential for preserving fat-free mass.3https://www.ncbi.nlm.nih.gov/pubmed/23680169

Greek yogurt is a great way to increase your calcium on keto. Calcium is essential for helping build strong bones and teeth.

A single cup of keto yogurt contains nearly 50% of the recommended daily intake (RDI) of calcium. 6https://www.ncbi.nlm.nih.gov/pubmed/15018485 Low levels of calcium may lead to what is known as hypocalcemia, which could have you feeling tired or exhausted on keto.

Ideas How To Use Oikos Triple Zero On Keto

Assuming you want to add in small amounts of Oikos triple zero on your keto diet, here are a few ideas I've used personally to spice up my keto recipes.

If you're looking for something to enhance your keto pancakes, a dollop of Greek yogurt and berries is quite delicious.

Take frozen yogurt and put them in a popsicle mold to create a great dessert option. You can thank me later.

You may only want to try this with the unflavored yogurt; it has a similar signature tart flavor. Use it as a lower-calorie and higher-protein alternative.

What Greek Yogurt Is Best For Keto

Now that you know there is a possibility for small amounts of Oikos triple zero, I want to give you the best keto yogurt options that have a lot fewer carbs for the same 150-gram serving.

Just remember, for a single cup (150g) serving of Oikos, you're eating between 10 and 14 grams of carbs. If you're looking to save in the carb department, I would recommend one of the three manufacturers below.

Here are some ketogenic yogurt brands I would recommend over Oikos.

Yoplait YQ has plain yogurt with only 2 grams of net carbs per container and 0 grams of fat. While Yoplait YQ does have flavored varieties similar to Oikos, they are generally not as “keto-friendly,” with 9 to 12 grams of total carbs.

Your best bet would be to get plain yogurts and sweeten it yourself with your favorite no-calorie sweetener like stevia or a sugar-free syrup-like Walden Farms.

I have great news for you if you can't stand unsweetened yogurt and don't want to sweeten it yourself. Two Good Yogurt is a keto-friendly yogurt with only 3 grams of carbs per container (150g) with no added sugar.

Even better is that ALL of their flavored varieties still only have 3 grams of net carbs and is sweetened with stevia. It may be one of the best yogurts for those following a keto diet.

Since I know the above two brands may be inaccessible for some individuals, I've listed Fage here as most grocery stores carry this specific brand.

Fage's plain Greek yogurt is considered a low carb yogurt with about 5 grams of carbohydrates per 150-gram serving size. Again, a great option may be to use a sweetener like a stevia for flavor.

They also have their flavored line called Fage TruBlend, which has 8 grams of net carbs per container, making it a low carb yogurt relative to Oikos and Yoplait's flavored Greek yogurts.

Fage may be one of the best yogurts that are accessible in almost every store.

When choosing 0%, 2%, or even 4% milk fat Greek yogurt, it all comes down to personal preference. I'd go with Greek nonfat yogurt over full fat Greek whole milk, but that's just me.

Whole milk yogurt has more grams of fat, which essentially means more calories. Also, the fat found in dairy comes from saturated fat. If weight loss is your goal, I'd suggest skipping the whole milk and go for the 0 or 2 percent.

Some websites tell you the higher the fat, the lower in carbohydrates, but that doesn't apply to most whole milk Greek yogurt. I guess some websites forgot to do their homework or are just copying what the next guy said.

If you don't mind Greek nonfat yogurt, that would be my choice as it contains the least amount of calories per serving. When it comes to weight loss, calories are still an essential factor that must be controlled despite whatever keto guru said it didn't.

Also, while the carbs are the same and fat may differ, the protein between whole-fat or nonfat are generally the same. Protein per serving will stay relatively static, whether high fat, low fat, or no fat.

So is Oikos yogurt keto-friendly? In minimal amounts, yes. Oikos still has 10 grams to 14 grams of carbs and 15 grams of protein per serving, which someone could fit into their daily carb budget.

Other yogurt brands have similar choices, but with fewer calories and carbohydrates for the same serving size, this may benefit some people's weight loss plans and keto goals of staying in ketosis.

It also doesn't matter if you eat full fat Greek yogurt or nonfat since they are both low carb with generally the same amount of carbs. If you're on a low carb diet or a low carb keto diet, Greek is a good yogurt to add to your food selection.