CAN I TAKE METAMUCIL ON KETO 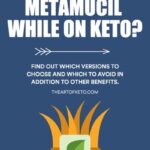 One of the questions I get quite often is, how do I add fiber to my keto diet? Which is understandable. Since a ketogenic diet limits carbohydrates, unless you're filling most of your carbs with fibrous vegetables, your ketogenic diet may be falling short in the fiber department.

Trust me, I'm not perfect, and sometimes I don't feel like vegetables either. This led me to search for alternatives to increase my fiber intake on keto through supplements like Metamucil and Benefiber.

Metamucil is a natural way to increase fiber intake on a keto diet as it contains psyllium husk powder, which is pure dietary fiber. The Metamucil sugar-free 4-in-1 varieties include the least amount of added carbohydrates with only 1 gram of net carbs per 2 tsp.

In this article, I'll go over which Metamucil products are keto-friendly and which to avoid, alternatives to Metamucil, and why you may not need to add additional fiber on your ketogenic diet.

Can I Take Metamucil On Keto?

People often ask whether or not they can supplement with Metamucil on keto, either because they're constipated, or they feel like they have a lack of fiber in their daily diets.

When it comes to Metamucil, specifically the powders, they are perfectly acceptable to ingest while following a ketogenic diet, all of them except the ones with real sugar, of course. You'll be able to tell which ones have sugar and which do not, as the front of the label explicitly says sugar-free or real-sugar on them.

Bear in mind, the sugar-free 4-in-1 fiber versions of Metamucil is the most “keto-friendly,” since it has only 1 gram of net carbs per 2 teaspoons.

Metamucil also offers two other sugar-free varieties labeled as premium blend and appetite control. While these two different sugar-free versions may be taken on a ketogenic diet, they have 5 grams of net carbs per two teaspoons serving versus the 4-in-1.

Just make sure whichever version of Metamucil you decide to take, it's the sugar-free version, and you count the net carbs towards your daily intake.

Do I Need To Supplement With Metamucil?

While you should be getting a bulk of your fiber from fibrous vegetables on a ketogenic diet, sometimes that can't always be done.

Whether or not you should supplement with a fiber supplement like Metamucil on your ketogenic diet will depend on why you feel the need to. With the bulk of people looking to add Metamucil on keto due to constipation, I'll address that here.

Often, we can misinterpret constipation with the lack of having to go to the bathroom.

Ask yourself if you actually feel constipated, or have you just become accustomed to going to the bathroom?

As you diet, not only are you consuming less food, but over time, your body adapts by slowing down digestion.

While not always accurate, you should be able to tell if you're constipated and have food sitting in your stomach versus just not having to go.

How Much Psyllium To Take On Keto? Can You Take Too Much Fiber On Keto?

Assuming you're constipated and want to add in additional fiber from Metamucil, then this little section is for you.

So how much psyllium should you add to your ketogenic diet? While there is no set amount you should take, one study found that 5 grams of psyllium husk twice per day helped control blood sugar in people with type 2 diabetes. 1https://www.sciencedirect.com/science/article/pii/S0378874105003983?via%3Dihub.

While psyllium doesn't need to be taken alongside a meal, it's highly suggested to take it with a sufficient amount of liquid.

Bear in mind, too much of anything is never good, even fiber. With too much fiber, you may experience signs of abdominal bloating, gas, and even pain.

Since most people don't particularly like drinking psyllium husk on its own, they will usually drink it mixed in with juice or another flavored beverage.

This is where Metamucil comes in.

Metamucil is a popular brand of the psyllium husk fiber, with added flavor. Therefore, if you don't mind mixing your psyllium husk in water or taking it straight in the mouth and chasing it down, save yourself some money and buy the generic stuff.

What Is Psyllium Husk?

Psyllium husk is a natural dietary fiber that contains both insoluble and soluble fiber, but mostly ~70% soluble fiber.

Psyllium is made from the husks of the plantar ovate plant's seeds, also known as ispaghula, and is grown in regions of India. The name psyllium comes to us from the Greek word “psylla,” which means flea since the seeds resemble a cluster of the insect. https://en.wikipedia.org/wiki/Psyllium

While psyllium husk contains a mix of both soluble and insoluble fiber, it is primly made up of soluble fiber.

The main difference between soluble and insoluble fiber is that soluble fiber pulls water and turns to a viscous gel during digestion. This gel allows more water to remain in the stool, making it softer, more substantial, and hopefully easier to pass through your intestines.

On the other hand, insoluble fiber adds bulk to your stool, with the thought that it helps food pass more quickly through the stomach and intestines.

Basically, soluble fiber makes your poop softer while insoluble fiber is supposed to make it larger, even though they both do a little of each.

What Are The Benefits Of Psyllium Husk

Aside from helping relieve symptoms of constipation, psyllium husk may have additional benefits.

While we are already reducing our glucose intake on a ketogenic diet, the addition of psyllium may help offset the insulin response of a higher carb meal.

5g of psyllium taken 3x per day over six weeks was able to reduce glucose and improve lipids in people with diabetes. 3https://www.ncbi.nlm.nih.gov/pubmed/9747644

May help with appetite

One of the benefits of keto is that many people experience feeling satiated, despite losing weight. 4https://www.ncbi.nlm.nih.gov/pmc/articles/PMC4313585/

While hunger is almost inevitable on any weight loss diet, even a ketogenic diet. The addition of psyllium can help promote the feelings of fullness, which will help you control your food intake. These effects seem to be related to both delayed gastric emptying 5https://www.ncbi.nlm.nih.gov/pubmed/1398229 and the gel-forming properties of psyllium. 6https://www.ncbi.nlm.nih.gov/pubmed/16549450

Alternatives To Metamucil On Keto

As I stated, Metamucil is just a popular brand that packages psyllium husk with flavoring. Other brand names use psyllium husk as its leading fiber ingredient, or you can buy psyllium husk on its own and save a few dollars.

Here are a few alternatives to Metamucil

While you should avoid the sugar-versions of Metamucil, their sugar-free versions are perfectly acceptable to take while following a ketogenic diet.

Also, ask yourself if you are constipated, or if you're just used to going to the bathroom and experiencing less frequent bowel movements.

While dieting, it's expected to have fewer trips to the bathroom due to eating less food.

Assuming you are constipated, you should first look at getting fiber from fibrous vegetables before considering a supplement like Metamucil.