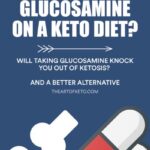 I used to take glucosamine at one point in time. During my previous days as an endurance athlete, I would use glucosamine as a little insurance policy for my joints, especially my knees. However, I can't say without a doubt whether I found it useful or not.

Can I take glucosamine on keto? Glucosamine may be taken on a ketogenic diet without kicking you out of ketosis.

In the article I’ll go over whether glucosamine affects ketosis and weight gain, if it’s even worth using, and possibly a better alternative.

Understandably, you're wondering whether or not glucosamine affects ketosis. After all, glucosamine is technically an amino sugar, hence the word ‘glucos' in the name, which is another word for sugar.

Early research even suggested that glucosamine could cause insulin resistance. Rest assured, follow up studies cleared glucosamine supplementation and any effect on blood glucose levels, glucose metabolism, or insulin sensitivity.1https://www.ncbi.nlm.nih.gov/pmc/articles/PMC3042150/

As long as you're not consuming glucosamine in a form that contains additional added sugars, such as gummy form or in a ready to drink (RTD) mix, you should generally be ok.

However, glucosamine does contain calories, and they do come from carbohydrates. On average, a serving of glucosamine sulfate from most brands lists each serving as having ten calories and 2g of carbs, which isn't enough to knock you out of ketosis.

Things That Knock You Out Of Ketosis

While a single serving of glucosamine isn't enough to knock you out of ketosis, the 2 grams of carbohydrates should be added to your daily carb total if you want to play it safe.

The determining factor whether or not you'll achieve or maintain a state of ketosis is the TOTAL amount of carbohydrates you consume over the day. Ketosis is a metabolic state established by eliminating or restricting carbohydrates under a certain amount.

i.e., If you can eat 50 grams of net carbs per day and maintain a level of ketosis, by which you've tested by measured ketone levels, even eating a small bowl of oatmeal wouldn't necessarily knock you out of ketosis.

How many carbohydrates you can consume in a given period without being knocked out of ketosis is individual, but 20 – 50 grams of net carbs seems to be safe for most people generally.2The only real way is to experiment and test your ketones via a blood ketone meter or other methods of your choosing.

Factors that influence how many carbohydrates you can “get away with” include:

Studies on athletes suggest doses as high as 3,000mg of glucosamine sulfate may be able to slow joint degradation. If you're an athlete participating in high impact sports, glucosamine may be worth considering.5https://www.ncbi.nlm.nih.gov/pubmed/19724889

Also, glucosamine has even been used to treat conditions due to inflammation. One study found a 28 percent and 24 percent reduction in two markers of inflammation, CRP and PGE.6https://www.ncbi.nlm.nih.gov/pubmed/24738579

While these numbers aren't statistically significant, it does show there is potentially something happening, but further research must happen before any reliable conclusions.

Glucosamine side effects and weight gain

For the most part, glucosamine seems to be safe for most people. Aside from the shellfish allergy, some experience taking glucosamine, possible adverse reaction include7https://pubchem.ncbi.nlm.nih.gov/compound/D-glucosamine:

Also, a study in 2013 found glucosamine may increase the risk of glaucoma, a condition that damages your eye's optic nerve.8https://jamanetwork.com/journals/jamaophthalmology/article-abstract/1690919 Again though, there's nothing definitive about the adverse side effects.

Therefore, the only way glucosamine would be able to cause weight gain would be if it stimulated your appetite, causing you to overeat.

Best supplements for a keto diet

If you're looking for effective supplements to optimize your ketogenic diet or contemplating taking fat burners on keto, there are very few that are shown to be effective. For joint health, collagen may be a better option than glucosamine and chondroitin combined according to one study.9https://www.medsci.org/v06p0312.htm

Compared to the glucosamine and chondroitin group, collagen supplementation was found to reduce pain during exercise by 20 percent versus 6 percent.

In a study of subjects with NO history of arthritis reported that supplementation helped improved knee range of motion almost 8 degrees. Subjects taking collagen also experienced a longer time for joint pain to occur during exercise and faster recovery.11https://www.ncbi.nlm.nih.gov/pubmed/24153020

Hydrolyzed collagen protein can be bought in supplement form or obtained in collagen-rich foods like bone broth. A dose of 10 grams per day for skin health and minor joint benefits seems to be the dose most studied.

Glucosamine naturally occurs within your body, and supplementing with it shouldn't kick you out of ketosis. While it appears to be safe for most people, some individuals may experience an adverse reaction, especially those allergic to shellfish.

Another possible supplement that may be worth considering is hydrolyzed collagen protein, which has shown some benefits to joints, contains no carbohydrates, and is rich in glycine.12Glycine has been shown to have many health benefits such as improved sleep quality