HALF AND HALF KETO FRIENDLY 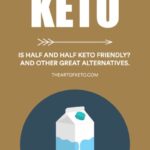 When it comes to coffee, I like it as pure as can be. I love my coffee bold, black, and strong, but the Mrs. likes hers with some half and half. Being that I've never needed to use any, I didn't have the nutrition facts on the top of my head and wasn't sure if half and half is keto friendly, and here's what I found.

Those following a keto diet may use half and half as a great way to add flavor to coffee or enhance different recipes. Half and half is equal parts of heavy cream and whole milk, hence the name half and half, and has less than 1 gram of carbohydrates per 2 tablespoons.

In this article, I’ll go over how much half and half you can have, how many carbs it has, better substitutes for half and half, strategies to reduce your carb intake, and some keto friendly recipes.

Can You Have Coffee With Half And Half On A Keto Diet?

After starting your keto diet, you may be asking, what can I put in my coffee on keto?

Half and half, which is a mix of heavy whipping cream (HWC) and whole milk, is perfectly acceptable to use in your coffee while on a keto diet.

Both are relatively low in carbohydrates, which makes half and half on keto perfectly acceptable.

However, there are fat-free varieties of half and half that combine skim milk with corn syrup instead of cream.

This fat-free mixture results in a half and half product that is generally higher in carbohydrates, which may not be ideal on a keto diet as the full-fat variety.

When splashing your morning Joe with some half and half, stick to the “regular” version over the fat-free version to keep it on the safer side.

Is Half And Half Low Carb?

Since half and half is equal parts heavy whipping cream and whole milk (WM), let’s analyze both ingredients individually to get a better understanding.

Heavy whipping cream is the thick part of the milk that rises to the top due to its high-fat content. It’s like if you poured oil and water into a cup, and the oil rises to the top of the glass.

Per fluid ounce (2 tbsp or 30g) has less than 1 gram of carbohydrates, 0.8g, to be exact. 1https://nutritiondata.self.com/facts/dairy-and-egg-products/51/2

Essentially, one tablespoon has less than half of a gram.

On the other hand, WM has less fat content than HWC and slightly more carbohydrates.

I guess depending on how heavy your pour is; you would end up with more or less around 2-3 grams of carbs per serving if you wanted some half and half in your morning coffee.

If you only use one tablespoon or thereabouts, your carb count should be nothing to worry about.

Therefore, half and half has quite a low carb count, especially compared to only using milk.

Is Half And Half Healthy?

Everyone has their definition of what “healthy” is. According to the Oxford dictionary, health is defined as being free from illness or injury.

Unless you find yourself with a dairy allergy (lactose intolerant), there’s no reason to avoid half and half or other dairy products.

Relative to coffee creamer, half-and-half is a healthier option that does offer certain health benefits.

Half and half is less processed, contains healthier fats, and more than likely doesn’t have all the added fillers and sugars.

Half and half is also a good source of calcium, Vitamin A, Vitamin B2, Vitamin B5, Vitamin B12, beta carotene, and many more.

Vitamin A especially is important for vision, the immune system, and reproduction.

I wouldn’t recommend you drink half and half as a beverage in itself, especially since it is still relatively high in calories per serving, and that can sabotage a keto dieters weight loss efforts.

But, a splash of half-and-half in your coffee can be a great and healthy alternative offering health benefits relative to other coffee additives.

It's been long thought that saturated fat contributed to heart disease development, but current research has since debunked that, showing there is NOT a strong link between dairy fat. 2https://pubmed.ncbi.nlm.nih.gov/31841151/

Of course, this isn't meant to be health or medical advice.

Substitutes For Half And Half On A Keto Diet

What else can you use instead of half and half? If you’re looking to save on your carb count as much as possible, here are a few options that won't break your carb limit.

I’d opt to use this instead of half and half. If consuming as little carbs as possible is your priority, use HWC.

Keep in mind, half and half is merely two different dairy products combined. Since the majority of the carbs are in the milk portion, using only HWC may be a viable substitute for half and half while on a keto diet.

If you’ve heard of keto coffee or bulletproof coffee, then butter in your coffee may not sound so weird.

Surprisingly, blending butter in your coffee makes it frothy and creamy, and of course it would… it’s no different than putting in heavy whipping cream into your coffee.

Butter butter is just a fattier version of heavy whipping cream if you think about it.

Some people even substitute butter and milk in place of heavy cream.

Just remember, these are all high in calories per serving, so use sparingly.

Want a dairy-free plant based alternative? Perhaps you're lactose intolerant or have a milk protein allergy?

Try some coconut cream or almond milk instead of half and half or heavy whipping cream.

There are 2 grams of carbs per two tablespoons along with 10 grams of fat, almost similar to that of half and half.

You’ll also have that coconut flavor as a bonus. That is unless you don’t like coconut.

Remember to get full-fat and not coconut milk. However, Califia Farms offers a very low-carb coconut milk and almond milk, which is also plant based and can be store bought.

Don't confuse this with coconut water, which is high in carbs.

Another choice is coconut milk powder which tends to have fewer carbs than liquid coconut milk.

Thanks to the growing spread and popularity of keto, more and more keto diet products are coming on the market.

While you should still be mindful of people trying to take advantage of this opportunity, some genuinely have excellent products that can aid your ketogenic lifestyle.

Here are a few coffee creamers or blends:

I was entirely against instant, but I became a fan of Trader Joe's instant Colombian.

What could be easier than adding hot water and having a delicious cup?

While I’m not a fan of all instant coffee, I do love this one from Perfect Keto with no artificial ingredients.

Perfect Keto is sweetened with stevia, has natural flavors, and has included Medium Chain Triglycerides (MCT) for increased ketone, energy, and cognitive function.

Comes in either unflavored, French vanilla, or Mocha, and perfect for traveling or taking to work.

Purchase via the image below. You can use code: AOK15 for 15% off your purchase.

If you’re looking for something a little more spruced up, keto coffee creamers from LevelUp are loaded with healthy fats:

It comes out creamy, and I would compare the taste to something like using a coffee mate.

And last on my list is Keto Delightful Ketogenic Creamer by Vaxxen Labs.

This keto creamer is filled with grass-fed butter powder, MCTs, Hydrolyzed collagen, and a bit of coconut powder, then sweetened with stevia.

Comes in Vanilla, Cafe Mocha, and Salted Caramel (my favorite)

Half and Half Keto Recipes

If you’re looking for a low-carb coffee, the most popular ones you may have heard of is bulletproof or just the generic “keto coffee.”

Most of these recipes use a combination of a few of the following healthy fats and other ingredients:

Here are some recipes and videos for inspiration in making your own at home.

Want an iced coffee for those hot summer months? Try this recipe out and use half and half or heavy cream. You could also be even fancier and use one of the recommendations above for added MCT, collagen, and flavorings.

I will either brew my coffee or use the Perfect Keto instant coffee I mentioned above, then simply mix everything and top with ice.

Of course, if you use a flavored keto coffee creamer above, you can forget using the flavorings in the recipe.

Do you miss having your caramel frappe from Starbucks? The sugar content of those drinks can be mind-blowing if you've never bothered to check.

Me, I'll take my black coffee any day.

Here is a perfect alternative using almond milk as the base with some heavy whipping cream (or use half and half).

Here’s how to make your standard keto coffee but as healthy and non-toxic as possible.

There may be websites that tell you that half and half isn’t “keto.”

For one, keto is a metabolic state, not a food. Secondly, half and half has minimal carbs per serving with only ~3 grams of carbs per 1/4 cup (4 tbsp).

Keep in mind, as long as you are only using a splash and not chugging a cup of the stuff, using half and half in moderation is perfectly acceptable for keto dieters adding very minimal amounts of carbs per day.

It's definitely not enough to make or break your weight loss efforts.

However, you could also use some of the creamers above if you want to reduce your carb intake as much as possible and get some added MCTs into your ketogenic diet.