HOW MANY CARBS IN ALMOND MILK 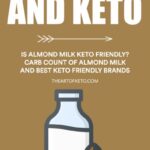 However, even though there are nearly a dozen different types of “milk” products on the shelves these days, almond milk still seems as if it’s the most popular alternative to dairy, even surpassing soy milk. 1http://ageconsearch.umn.edu/bitstream/196789/2/Dharmasena_Capps_Kosub_Almond_milk_SAEA_2015%20%28paper%29.pdf 2https://www.bloomberg.com/news/articles/2013-08-21/soy-milk-fades-as-americans-opt-for-drinkable-almonds

In this article, I’ll cover which almond milks you can have on keto and which to avoid. I’ll also dive deeper into almond milk, explaining what it is, how it’s made, and when you may want to avoid it on keto.

Can You Have Almond Milk On Keto?

The good news is you can have almond milk while following a ketogenic diet. The bad news is, you need to stick away from the sweetened and flavored varieties that are most common at restaurants and store shelves.

Unsweetened almond milk is generally safe to drink while following a ketogenic diet.

While you can potentially fit in a small 8 oz. cup of the sweetened variety, it isn’t worth it for most people to consume regularly.

Bear in mind, when I say you can potentially fit in a cup of a sweetened variety, it’s because you could do so if you wanted to fit it in your daily carbs for the day.

Most people following a ketogenic diet will find themselves staying between 20 and 50 grams of net carbs per day, but likely on the lower end of that scale.

You can look at your net carbs for the day, almost like a budget you get to spend. The more you have, the more flexible you can be with your choices, similar to money.

If your daily carb limit is 20 grams of net carbs, drinking one cup of sweetened almond milk wipes out nearly half of your budget for the day, and that’s for the lower sugar varieties.

Whether it’s worth it to you to spend half of your carb budget on a glass of almond milk is entirely up to you, because it may be worth it once in a while. However, most of the time, your carbs should probably be spent on fibrous and micronutrient-rich sources like vegetables.

How Many Carbs Are In Almond Milk?

In terms of unsweetened almond milk, an 8 oz. cup (240 ml) serving has a total of 2 grams of carbohydrates, of which 1 gram comes from dietary fiber.

Remember, when looking for almond milk at the grocery store, make sure the label says “unsweetened” on it.

I’ve made the mistake of purchasing a higher carb variety thinking that original and not flavored like “vanilla” meant that it was plain and unsweetened. Even the plain original almond milk is sweetened, so make sure you get one that says explicitly unsweetened on the carton.

Here is an example nutrition label of an “original” almond milk.

Which Almond Milk Is Best For Keto

The best almond milk for keto is any almond milk that explicitly says unsweetened on the carton. Below is a list of some popular almond milk varieties that you can find at your local grocery store that are keto friendly.

Most of the below almond milk may be found at a grocery store near you and only have ~1 gram of net carb per 8 oz. cup.

What Is Almond Milk

You may be wondering, what exactly is almond milk?

This almond reminds me (see what I did there) of that scene from Meet The Parents where Ben Stiller’s character explains to Robert De Niro’s of things you can milk, you’ll have to watch if you’ve never seen it.

Anyhow, almond milk at its purest is simply a blend of ground almonds and water.

Since almond milk is naturally dairy-free, it’s a perfect alternative for those with a dairy allergy, lactose intolerant, vegans, 3https://www.ncbi.nlm.nih.gov/pubmed/25575046 and of course… ketogenic dieters.

So how does one milk an almond?

How Is Almond Milk Made?

Obviously, we can’t “milk” an almond in the most traditional sense like we would a cow or a goat. How then can we extract that creamy goodness from a nut of all things?

First, the skins of the almond are removed by soaking them overnight. When almonds are soaked, the skin softens enough that it peels right off when they are rinsed.

The almonds are then put in a blender with water and mixed until smooth. Lastly, the mixture is strained using a cheesecloth or nut milk bag to separate the solids from the liquid, leaving you with almond milk.

For a simple recipe with step by step instructions, here is a recipe from Running On Real Food.

There may be more than the lower carb count of almond milk that makes it a great alternative to dairy on a ketogenic diet.

Here are some of the benefits of almond milk.

Despite what other keto gurus may lead you to believe, calories still matter at the end of the day when it comes to losing weight. 4https://www.ncbi.nlm.nih.gov/pmc/articles/PMC5274550/

One cup of almond milk can provide up to 50% of your vitamin E requirements; it just depends on the brand.

Despite almonds being naturally high in vitamin E, most manufacturers fortify their almond products with extra vitamin E during processing.5https://www.ncbi.nlm.nih.gov/pubmed/27777447

Vitamin E has a wide range of benefits. Studies have found that vitamin E also improves mental performance and reduces the risk of Alzheimer’s disease, which ketones are currently being studied for as well. 6https://www.ncbi.nlm.nih.gov/pmc/articles/PMC4276978/

Wondering how to get calcium on keto? While almonds themselves don’t have as much calcium as milk or other dairy products, almond milk does.

Lactose intolerance may affect as much as 75% of people around the world. 8https://www.ncbi.nlm.nih.gov/pubmed/25575046

Lactose intolerance is caused by a deficiency in the enzyme lactase, which is responsible for breaking down the sugars in dairy into a more digestible form.

Everything from genetics to aging can cause lactose intolerance 9https://www.ncbi.nlm.nih.gov/pubmed/24443063, and because almond milk is naturally lactose-free, it’s a perfect dairy replacement for many.

Best Ways To Use Almond Milk On Keto?

Almond milk, similar to half and half or heavy whipping cream on keto, are great alternatives and offer a variety of uses.

Here are just a few of many ways to include some almond milk in your ketogenic diet.

Who said you couldn’t eat ice cream on a ketogenic diet? Almond milk makes a great alternative to dairy for a lower carb option ice cream base.

I often make this delicious keto friendly ice cream using almond milk and avocados for a creamy, rich dessert, which is loaded with potassium and healthy fats.

Scrambled eggs are supposed to be light and fluffy. Most recipes and restaurants use additional butter and dairy to make their scrambled eggs, but you can also use almond milk as a replacement.

If you’re trying to come up with a dairy and lactose-free way to make scrambled eggs, try almond milk.

I like my coffee black, but you may want a splash of milk in yours.

Use almond milk in place of dairy for a lower carb latte or to just spice up your coffee a bit.

Make lower-carb smoothies using almond milk as your base and throw in whatever else you like.

For a more fruity smoothy, you can use berries like strawberries, blackberries, and blueberries, which are lower in carb along with your favorite sugar-free sweetener of choice.

If you want a rich and creamy smoothie, I like to mix in some avocado and peanut butter (and cocoa If you want it chocolatey).

Here’s one from Joe Duff that’s simple to make.

Yes, just drink it plain, and have it alongside a keto-friendly Lily's chocolate bar or some Keto Oreo’s courtesy of The Primitive Palate.

Sometimes you miss having a cold glass of milk on a hot summer day or washing down a rich keto-friendly dessert for those special occasions.

When Should Almond Milk Be Avoided On Keto?

Almond milk should only be avoided if you have a nut allergy, or of course if you don’t enjoy the taste.

Another reason almond milk should be avoided is if you’re intermittent fasting (or doing prolonged fasting) for any type of health benefits such as autophagy, increased HGH, etc.

Will almond milk break a fast? Almond milk should be avoided if you’re fasting for health benefits. In terms of weight loss, intermittent fasting, and regular caloric restriction show a comparable effect in weight loss. Therefore almond milk is not detrimental to weight loss if calories are equated at the end of the day. 10https://www.ncbi.nlm.nih.gov/pmc/articles/PMC6304782/

Therefore, consuming almond milk during your fasting window if fat loss is your primary goal shouldn’t matter if your calories are the same at the end of the day.

If fasting for health benefits, you should be consuming only water during your fasting window for the most optimal benefits.

Almond milk is keto friendly, but typically only the unsweetened kinds.

When shopping for almond milk, make sure the carton says unsweetened; otherwise, you’re likely getting almond milk with added sugars.