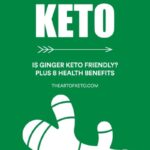 There are literally three ingredients I like to use in and on almost everything (besides salt and pepper), and that’s garlic, onions, and ginger. I put ginger in almost everything, whether it’s pickled ginger, fresh ginger, or ginger tea.

The health benefits of ginger make consuming ginger a bonus, but also part of the reason I make sure to include it in my diet, even on a keto diet just in case you're wondering.

In this article, I’ll go over what ginger is, and the benefits ginger has, different types of ginger products that may or may not be keto friendly, and how to include it on your keto or low carb journey.

Not only is ginger keto friendly, but ginger has so many proven health benefits supported by scientific research.

Now, not everything with ginger in it may be keto-friendly, but fresh ginger is relatively low carb for the amount you would typically use for things such as cooking or tea.

Therefore, feel free to include fresh ginger as one of your ingredients..

Or, what I like to do is slice up some ginger and throw it in hot water and let it steep for a few minutes. This allows the water to absorb some of the nutrient and bioactive compounds in ginger while giving it a spicy kick.

Ginger is a root that people have been using for cooking and healing for thousands of years.

Technically, ginger is a flowering plant, but it’s the root of that plant that we associate with ginger today.

Originally, ginger was thought to originate in Southeast Asia but is now widely grown all over the world.

If you’re familiar with turmeric and the benefits, you can think of ginger as a close relative since it is also a member of the same family.

Ginger can be eaten fresh, dried as a spice, or made into supplemental forms such as tablets, capsules, and liquid extracts.

How Many Carbs Are In Ginger?

While ginger is primarily carbohydrates, the amounts you would use are so minuscule it would be negligible.

Ginger root and ginger powder have 0 grams of fat and 0 grams of protein.

Unless you are eating copious amounts of ginger, which would lead to other problems I’ll talk about later, there’s no need to worry about eating too many net carbs.

What Are The Benefits Of Ginger?

Ginger has a whole host of health benefits backed by scientific research, and it’s one of the main reasons I include it in my diet and various keto recipes.

In Asian medicine, ginger was used to treat stomach issues such as nausea and diarrhea.

Today, medical uses for ginger span from muscle and joint pain to skin burns. Here are just a few of the health benefits of ginger proven by science.

Ginger contains gingerol, which is the natural oil that gives ginger its unique fragrance and flavor. GIngerol is the primary bioactive compound responsible for its anti-inflammatory and antioxidant effects. 1https://www.ncbi.nlm.nih.gov/pubmed/25230520

May Help with osteoarthritis

Joint pain and stiffness is a common problem among many older individuals. In a study with 247 people, those who took ginger extract experienced reduced pain, thus required less medication. 3https://www.ncbi.nlm.nih.gov/pubmed/11710709

Many individuals following a keto diet may have discovered keto due to suffering from type 2 diabetes or pre-diabetic.

Two grams of ginger powder lowered fasting blood sugar by 12% in individuals with type 2 diabetes. Over 12 weeks, this led to a 10% reduction in HbA1c, which is a marker for long-term blood sugar levels. 9https://www.ncbi.nlm.nih.gov/pmc/articles/PMC4277626/

Ginger is excellent for the digestive system. Ginger appears to help with stomach emptying, which may be beneficial for those with indigestion, IBS, or other stomach discomforts.

A study of 24 healthy individuals consumed 1.2 grams of ginger before a meal, which accelerated stomach emptying by 50%. 10https://www.ncbi.nlm.nih.gov/pubmed/18403946.

As we get older, sometimes our brain isn’t as sharp as it once was. In a study of middle-aged women, ginger helped improve both reaction time and working memory. 12https://www.ncbi.nlm.nih.gov/pmc/articles/PMC3253463/

As you can see, ginger has a whole host of health benefits that may make it worth including in your diet or worth supplementing with if funds allow.

How To Use Ginger On Your Keto Diet?

This is by far my favorite way to consume ginger, especially during the colder months. I’ll usually slice three to four pieces of ginger and steep it in hot water for four to five minutes or bring it along in a thermos to work.

You may also purchase ginger-based teas like the following (2 of my favorites):

Keto ginger tummy tea is similar to the simple ginger tea above, except tummy tea combines ginger and turmeric, which is another low carb spice. I like to drink plain hot water or this tea after a hearty meal or when feeling a bit queasy, hence the name tummy tea.

Aside from helping ease the digestive system, some folks may find that this concoction can give them a boost in energy levels as well. Think of tummy tea almost like an all-natural energy drink.

Looking for something to spruce up your veggies and salads? This Asian styled ginger keto dressing uses olive oil or coconut oil and ginger to give you just that in a keto-friendly dressing.

Photo and recipe courtesy of I Heart Umami

You can also purchase Walden Farms sesame ginger dressing which has zero calories and net carbs.

Another great way to use ginger is to marinate your meat with crushed or powdered ginger… or both.

A simple keto ginger marinade I like to use is ginger combined with soy sauce or fish sauce, a bit of vinegar, and other spices to marinate chicken, beef, and even fish.

In general, most pickled ginger you’ll find at the grocery store and most commonly served at sushi restaurants is “marinated” in a mixture of rice vinegar and sugar.

Your best bet when it comes to pickled ginger is making your own.

Most pickled ginger from stores and sushi restaurants are not keto-friendly and should generally be avoided, or very little should be consumed on a keto diet. To ensure a low carb pickled ginger, you should make your own.

Here is an excellent recipe from Ketogenic Woman

As with most sodas, ginger ale is also filled with sugars and/or high fructose corn syrup making them poor choices for a ketogenic diet and not keto-friendly.

Want to know about other diet soda such as Diet Coke? Check out my article below.

Most ginger beers have added sugars, thus making them not keto friendly.

I have seen zero sugar ginger beer by brands such as Reed’s, which you may purchase online, or if you’re lucky to find it at your local Trader Joes.

Zevia has their own keto ginger beer sweetened with stevia.

I like to use Walden Farms Sesame Ginger dressing, which not only is keto friendly but is also calorie-free.

How Much Ginger Should I Consume For Health Benefits?

Dosages between 1-3g are used in most studies. When considering supplementation or ingestion within keto recipes, you may want to use the following:

But too much of anything is never a good thing. Consuming too much ginger may lead to:

Not only is ginger a keto-friendly spice, but it has traditionally been used as medicine for a variety of reasons, including nausea, lowering blood glucose, and helping with digestion.

Don’t hesitate to start adding in some fresh ginger or ginger supplements to your keto diet to reap the health benefits ginger provides.