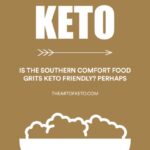 Depending on where you’re from, grits may have been a staple for you growing up. However, I may have unfortunate news for those who want to include them on keto.

Ninety percent of the calories from grits come from carbohydrates, making it not a suitable food choice for those following a keto diet. Just one cup of dry grits has 120 grams of net carbohydrates, which is more than double most individuals' carb targets for the day.

Being stationed in the South during my military years, I became very accustomed to grits… ON EVERYTHING! I would go through the dining facility line, and at the very end, have the guy pour grits on my entire breakfast.

In this article, I’ll go over why grits are not ideal for keto, how you may still be able to enjoy some from time to time, the number of carbs in grits, keto-friendly substitutes, and more.

Are Grits Bad For The Keto Diet?

Many people who follow a low-carb or ketogenic diet are advised to eat meat and veggies but stay away from starchy vegetables like carrots or corn.

While that’s generally good advice, it doesn’t exactly tell you WHY you should stay away from them. I’d argue that you may possibly benefit from including some carrots in your diet.

Why do I bring this up you ask? Well, because grits are made with either hominy or stone-ground corn. Corn Is generally considered a carbohydrate source, which is what we’re trying to limit while following a ketogenic diet.

For our body to start producing ketones, we must first deplete our liver glycogen of glucose. 1This is the sugar stored in our body reserved for bodily processes, such as energy for your CNS and brain.

Only when liver glycogen is depleted will your body begin to produce ketones as a way to provide energy, thus allowing you to enter a metabolic state of ketosis.

How many carbs you must limit yourself will vary by individual, but most people find that between 20 and 50 grams of net carbohydrates are the sweet spot.

When we refer to food as keto-friendly, we’re just saying that the food is generally low in carbohydrates.

In reality, you could eat almost any food so long as you stay under your carbohydrates for the day. While you COULD eat grits, you would only be able to eat such a tiny portion; it likely wouldn’t be a worthwhile trade-off.

But who knows, it may be for some people, especially those who want that itty bitty taste and think it’s all worth it.

However, when attempting to lose weight, hunger is already an issue, and so is sufficient nutrition.

For the most part, the carbohydrates that you do have are best spent on nutritious whole foods such as green leafy vegetables, but having “fun” foods here and there isn’t entirely out of the question.

You can think of your carbohydrates as a budget that you get to spend. If I gave you $20 to eat for the whole day, it wouldn’t make much sense to buy a 6 oz — prime USDA filet mignon for $19.

While you could buy it, would it be worth starving the whole day to do so? Maybe sometimes it is, but that’s for you to decide.

Overall, grits aren’t so keto friendly due to them being primarily high in carbohydrates. The amount of grits you would be able to eat wouldn’t be worth it to most people.

How Many Net Carbs In Grits?

One cup of cooked grits have the following calorie and macronutrient breakdown:

For a half cup, that would set you back 19 grams of net carbs for those grits.

While you could potentially fit that into your daily budget, you can see how that may not be a worthwhile trade-off.

Can I Eat Grits On A Keto Diet?

Unless you are following a variation of keto, such as a targeted ketogenic diet or a cyclical ketogenic diet, it’s best to stay away from grits.

How Are Grits Made?

Grits is a Southern comfort food that dates back to the colonial days.

Not to be confused with polenta, grits are usually made from dent corn, a starchy and less sweet variety. On the other hand, polenta is made from finely ground yellow corn.

The corn is then treated with lime or another alkali to remove the hull, which makes it hominy. After the corn is dried, it is coarsely ground to become hominy grits.

Keto-friendly Substitute And Recipes For Grits

If you’re looking for that creamy taste, but without the carbs, here are a few recipes that make “grits” more keto-friendly.

For the most part, most of the recipes do utilize cauliflower as the base ingredient.

When I think of grits, there’s one other food I always associate with it, and that’s shrimp. Indulge in this southern comfort classic low-carb style.

Photo and recipe courtesy of Word To Your Mother.

Unfortunately, when it comes to finding a keto grits recipe with no cauliflower, I can’t seem to think of another low-carb substitute. I’m all ears for anyone who has any ideas on how to make a keto friendly grits substitute without cauliflower.

I know certain people either do not like cauliflower or limit different types of FODMAP foods, so I’ll keep this updated if I come across any.

While grits are delicious and versatile, they are not conducive to a ketogenic diet.

Grits are primarily made up of corn, and that makes grits a food relatively high in carbohydrates.

While you may be able to fit in a tiny portion, think ~.25 cup cooked, I don’t think it would be worth it.

However, if you’re following a targeted ketogenic diet or a cyclical ketogenic diet, grits may make the perfect carbohydrate source.