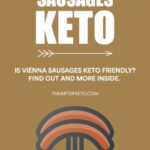 There are probably two distinct foods if you want to call them that, I fondly remember as a child growing up and eating almost weekly.

Ok, maybe more than once a week if I'm being honest.

In this article, I'll go over why you may or may not want to eat Vienna sausages while following a ketogenic diet, what they're made of, how vienna sausages are made, and possibly some recipes to give you a little inspiration.

Can I Eat Vienna sausages On keto?

Here's the truth about eating something while following a ketogenic diet.

You can eat ANYTHING on a ketogenic diet.

… If you slice it small enough.

Meaning, so long as you stay at or under your net carbs for the day, you should generally be ok eating anything, and won't be kicked out of ketosis.

However, some foods aren't worth the trade-off, and that's what makes food more keto-friendly than another.

I was able to score some Vienna sausages on deployment one time while serving in the Army, which made it convenient for me to still stay ketogenic while living in less than ideal conditions.

Vienna sausages are perfect as a keto snack, a travel snack, or saved for those times you're too lazy to cook.

What's better is they're non-perishable, you won't have to worry about them spoiling for a good while.

What Vienna Sausages Are Made Of

So while vienna sausage does have a LITTLE bit of sugar, it's not enough to make it anything to worry about.

At the end of the day, it's your total calories and carbohydrates that will matter most for staying in ketosis and weight loss.

Is Vienna sausage Healthy Or Bad For You?

Everything in moderation is perfectly acceptable as long as you are getting adequate vitamins and minerals as a whole.

If you're questioning some of the ingredients, since most people are familiar with the bulk of them, I'll go over some of the “questionable” ones.

The main job of sodium erythorbate is to cure the meat and help it retain that pinkish color we're all familiar with. Also, it inhibits the oxidation of food, allowing it to stay fresher longer.

Additionally, SE helps improve the stability of flavor and prevent the formation of carcinogenic nitrosamine (CN). CN's have been associated with some cancers. 1https://www.ncbi.nlm.nih.gov/pubmed/2017213 2https://oem.bmj.com/content/57/3/180

Sodium nitrate is a salt mainly used for the preservation of foods and most commonly found in cured meats (bacon, turkey bacon, beef jerky, hot dogs, and yes vienna sausages)

And while you may have heard of nitrates and products that are nitrate-free, that's because some studies may suggest that high levels of nitrates can cause problems such as colorectal cancer or lead to heart disease. 3https://www.mayoclinic.org/healthy-lifestyle/nutrition-and-healthy-eating/expert-answers/sodium-nitrate/faq-20057848

But there is also a study that concluded dietary supplements of inorganic nitrates might reduce blood pressure. 4https://www.nejm.org/doi/full/10.1056/NEJMc062800

As you see, it's not a black or white, good or bad scenario.

Too much of anything is never a good thing, so always try to practice moderation and avoid excessive sodium nitrate intake if you want to hedge your bets.

How Vienna Sausage Is Made

Vienna sausages are made similar to that of hot dogs.

All of the ingredients are pre-ground into large chunks and blended (chicken, beef, and pork). After, the spices are added and mixed thoroughly then emulsified so it may be stuffed into a casing.

The casing will serve as a mold to give it the shape you're familiar with while it's being heated and cooked.

Once the product has cooled, the casing is removed, cut into proper lengths, and then packed into the can. After inspection, chicken broth is added, and the lid is applied.

Are you looking for some inspiration for those vienna sausages? Here are a few ideas to get you going.

Keto pigs in a blanket

This recipe from Trina Krug uses little smokies, but substitute those out for some vienna sausages, and there you go.

Want an easy dish to bring to a tailgate or a party? Just cut the vienna sausages into halves or smaller and lightly pan-fry them to give them a crisp edge.

Now, all you have to do is poke a toothpick in them and serve them on a platter. Place your keto-friendly sauce of choice in the middle, such as a Walden farms sauce or mustard, and you have an easy appetizer or finger food.

Another easy recipe that has very minimal ingredients are these keto jalapeno popper dogs.

Substitute the hot dogs (or not) for your sausages or spam, and you have an easy snack or meal ready to eat in a few minutes.

With only 3 grams of net carbs per serving and 6 grams of total carbohydrates per can, vienna sausages can make for an easy keto friendly snack or meal.