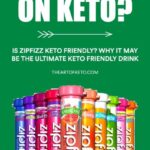 Before all of the keto craze, there were rarely any other electrolyte-based drinks that had a decent amount of potassium, except for zipfizz, that is.

Just look at a bottle of G-Zero or Powerade, and you’ll see there’s barely any potassium (or any electrolytes for that matter).

Is zipfizz keto friendly? Zipfizz is considered a keto friendly drink mix as it is relatively low in carbohydrates, and also contains a decent amount of electrolytes, especially potassium.

In this article, I’ll go over which zipfizz products are keto and which are not, the carb counts of each, alternatives to zipfizz, and much more.

Can You Drink Zipfizz On A Keto Diet?

Zipfizz was probably one of the only popular electrolyte type drinks that had a sufficient amount of potassium a few years back.

What made it even better was they sold them at the local Costo, which made it very accessible, especially for those who live in the United States.

All of the different zipfizz flavors are artificially sweetened, leaving them with little to no carbohydrates. Meaning, they are perfectly acceptable to enjoy while following a ketogenic diet.

Also, zipfizz contains 100mg of caffeine per serving, so it can work as a great pick me up or alternative to coffee (if you’re not a coffee person).

How Many Carbs Are In Zipfizz

Luckily, zipfizz kept it simple, and regardless of flavor, there are only 2 grams of net carbs per serving.

One serving of zipfizz equals one entire tube, which makes it easier to portion out or drink on the go.

While each flavor has the same amount of carbohydrates, the different flavors may vary in vitamin content, especially the following flavors which have a good dose of vitamin A:

If you’re looking to add a bit of vitamin A to your ketogenic diet, you may wanter to consider using one of the above flavors…

Additionally, zipfizz also has a separate product called energy shot, which contains a larger dose of vitamin B-12, a propriety energy blend, and a bit more caffeine than the regular zipfizz drinks.

Zipfizz is excellent for a ketogenic diet due to its electrolyte content.

Each bottle of zipfizz contains:

During the first few weeks of a ketogenic diet, people experience a substantial decrease in weight, which is mainly due to water loss.

The loss in water is primarily a cause of both carbohydrate restriction, but also due to decreased electrolyte intake, most notably sodium and potassium.

This loss of water and electrolytes make drinks like zipfizz crucial in helping prevent or alleviate symptoms related to dehydration and electrolyte imbalance, especially the keto flu.

Symptoms of the keto flu include:

If you’re experiencing one, multiple, or all of these symptoms, you may very well be suffering from what is referred to as the keto flu.

Adding in zipfizz, or one of the following electrolyte supplements may help alleviate or rid of these symptoms for you.

Other electrolyte supplements I recommend:

Zipfizz contains minimal carbohydrates and is sweetened with Sucralose, which is popularly known by the brand name Splenda.

Sucralose has a Glycemic Index of 0. The glycemic index is a number assigned between 0 and 100 based on how slowly or quickly, certain foods and beverages can cause an increase in blood glucose.

Many others I have spoken and chatted with also report no difference in blood sugar after drinking zipfizz. Of course, the only fool-proof way to answer this for yourself is to test it.

Worst case scenario, even if it were to spike your insulin slightly and knock you out of ketosis, it would be so short-lived you probably wouldn’t even know.

The reality is, we may be fluxing in and out of ketosis daily from almost anything, and is the least of your concern when it comes to weight loss; total daily calories still reigns supreme.

Can You Drink Zipfizz While Fasting

Does zipfizz break a fast? Zipfizz will break a fast as it contains at least 20 calories per tube. To optimize a fast for health purposes, it’s best to stick to plain water during the fasting period.

If you’re intermittent fasting with the only intention of weight loss, you’ll be glad to know that enjoying some zipfizz during your fasting window won’t make much of a difference.

If having zipfizz allows you to adhere to your fasting window, I’m all for having you drink zipfizz or any other zero-calorie beverage.

Research shows us that there is no inherent advantage to intermittent fasting over caloric restriction when it comes to weight loss.

Intermittent fasting (IF) is excellent for individuals who prefer that eating style or may not be hungry first thing in the morning. IF also allows you to have more prominent and more satiating meals, which helps people to adhere to a caloric deficit much more comfortable.

If you’re doing IF, but you find yourself starving and watching the clock, you can eat knowing it makes no meaningful difference when it comes to weight loss.

So stop stressing yourself out.

What Are The Different Flavors Of Zipfizz?

Again, all flavors have only 2 grams of net carbs per tube, which equates to one serving. Simply dilute one tube in 16-20 oz of water, shake, and enjoy.

Use zipfizz pre-workout, during your workout, after your workout, sipped throughout the day, or when you need a break from plain water.

Alternatives To Zipfizz On A Ketogenic Diet

Nothing beats whole-foods when it comes to getting the required vitamins and minerals you need.

To get enough sodium on a ketogenic diet, I often recommend individuals salt their foods liberally and to taste with a good quality salt like Redmond Real Salt, which contains a plethora of trace minerals.

A medium-sized avocado or 175 grams (~6 oz) of spinach has about the same amount of potassium as one tube of zipfizz.

Other electrolyte drink mixes you may want to consider include:

Zipfizz drink mixes are keto friendly and may be enjoyed while following a ketogenic diet. Each serving (tube) of zipfizz contains only 2 grams of net carbs.

Not only is zipfizz keto friendly, but it is one of the only electrolyte supplements that have an adequate amount of potassium, which is essential on any diet, especially keto.

The only zipfizz product you should be wary of is the zipfizz energy shots, similar to those 5-hour energy shots, as it has 8 grams of net carbs per serving.

Which you may be able to fit, but probably isn’t worth wasting that many carbs on.

You can try finding zipfizz at your local Costco or by using the link below to buy them in bulk and have it shipped to your door.