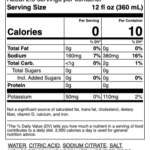 Before adopting a healthy lifestyle, I'll be first to admit I almost drank no plain water whatsoever; it was all sports drinks like Powerade and Gatorade for this teenager. Naturally, when making the switch to keto, I wondered if it was still ok to consume.

Gatorade Zero, also known as G Zero, is ok to drink while following a keto diet. G Zero contains less than one net carbohydrate per 12 fluid ounces, making it an excellent keto beverage with the added benefit of additional electrolytes.

In this article, I'll go over why it's ok to drink Gatorade Zero on keto, whether it really has carbs or not, additional keto-friendly drinks, and more.

Can You Drink Gatorade Zero On Keto?

Drinking Gatorade Zero while following a ketogenic diet is accepted due to being extremely low in carbohydrates, less than 1 gram per 12 fluid ounces to be exact.

The generally accepted range for carbohydrate consumption is between 20 and 50 grams of net carbs per day for those following a keto diet. A net carb is the total amount of carbohydrates consumed minus any dietary fiber or sugar alcohols.

In the case of G-Zero, a 12 fl oz. bottle has less than one net carb, which is entirely ok for those following a keto diet to consume. However, as with any food or drink on keto, it's best to drink Gatorade in moderation.

If your total fluid consumption comes from Gatorade Zero, the carbohydrates can begin to add up, eventually causing you to be knocked out of ketosis.

Does Gatorade Zero Have Carbs?

Yes, Gatorade Zero does have carbs, but the amount is minuscule with less than 1 gram, at least for the smaller 12 fluid ounce bottle. If consuming the larger 28 fluid ounce bottle (1.75 pt), then you will be ingesting a total of 2 grams of net carbs.

So when asking yourself is Gatorade Zero keto, it can be if you drink it in moderation. Please don't use your entire fluid intake on an electrolyte drink or energy drink even though they contain low or no calories.

What Is Gatorade Zero

Gatorade Zero is the no-calorie alternative to Gatorade's third quencher with 0 calories and less than one carb per serving.

Gatorade markets it's zero brand as “zero sugar hydration with electrolytes to replace what you lose in sweat.” As anyone who's been on keto for any significant amount of time can tell you, electrolytes are EXTREMELY important, especially for those following a keto diet.

Many individuals following a keto experience unpleasant side effects due to dehydration and an electrolyte imbalance caused by a low-carb ketogenic diet's diuretic effects. Here are a few links to posts you may want to read if they apply to you.

Gatorade Zero is a low to no-calorie sports drink with 0 grams of fat, <1 gram of total carbohydrates, and 0 grams of protein. Also, Gatorade Zero has 160mg of sodium and 50mg of potassium per serving.

The macros are excellent for those looking to achieve and maintain ketosis as ketosis is predicated on carbohydrate restriction. There are no flavors or ingredients that will inherently impact ketosis.

The Ingredients in G-Zero flavors are as follows:

The different flavors of G-Zero are:

No flavor is more keto-friendly than the other, and not that you asked, but lemon-lime has the absolute best taste, at least in my opinion.

Gatorade Zero is a sugar-free beverage made by PepsiCo, but not to be confused with their other product, G2. G2 is not keto-friendly but only a lower-sugar version of the regular line of Gatorade thirst quencher.

According to the U.S. Food & Drug Administration (FDA), a food must contain less than 0.5g of sugars per labeled serving size. Also, the food may not contain any ingredient that is a sugar. 1https://www.fda.gov/regulatory-information/search-fda-guidance-documents/guidance-industry-and-fda-dear-manufacturer-letter-regarding-sugar-free-claims#:~:text=%22Sugar%20free%22%20is%20defined%20in,21%20CFR%20101.60%20(c)).

As such, Gatorade Zero meets these label claims since it has less than 0.5 grams of carbs per serving size and does not contain any ingredients that may be considered sugar.

However, Gatorade Zero is sweetened with a non-nutritive sugar substitute, sucralose to be exact. Sucralose is popularly known by many under the name brand Splenda and is derived from sugar, but should have no impact on ketosis.

What Are The Benefits Of Gatorade Zero

Gatorade Zero's benefits are that it's a tasty way to increase your fluid consumption while also getting in some much-needed electrolytes.

While there are various keto-friendly ways to increase your sodium and potassium, Gatorade Zero is just one such way you may do so that's low in calories and net carbs. It won't spike your insulin to any significant degree.

Electrolytes are an often overlooked aspect by those following a ketogenic diet. Due to the extremely low carbohydrate nature and change in food sources, many individuals often end up dehydrated and an electrolyte imbalance.

When starting a ketogenic diet, many people experience a large shift in water weight due to carbohydrate restriction. On average, for every gram of stored carbohydrate, an additional three grams of water is also stored.

When carbohydrates are restricted, stored carbs are burned, and the water attached is also released. This is why you may pee more when first starting keto, but this also causes these vital electrolytes to be flushed out as well, which must be replenished.

Here is a youtube video that goes over some signs and symptoms that you may have an electrolyte imbalance.

Gatorade and other low carb sports drinks may cause concern as some outlets may lead you to believe there are health impacts related to artificial sweeteners.

Some of the claims are that artificial sweeteners may cause a rise in blood sugar or even cause weight gain. There is no credible report or study that would lead to the weight of evidence supporting these claims.

Acesulfame potassium, also known as Ace-K, is a sweetener typically used in workout drinks, diet sodas, flavoring, and many other products. There are more than 90 studies that support its safety.

Since there is no added sugar and does not contain any calories, it will not cause a sugar spike or have a negative impact on ketosis or weight loss despite what people may have you choose to believe.

When Should I Consume Gatorade Zero

There is no specific time to consume Gatorade Zero while following a keto diet since electrolytes and fluids are continuously required. Therefore, G Zero may be consumed whenever appropriate, although it may be a great time to consume after sweating or exercise.

The truth is, electrolytes should be continuously replaced throughout the day. There are no specific times that you have to drink Gatorade Zero for it to be appropriate, and they aren't only for athletes.

While it may be best to drink Gatorade Zero around periods of activity or when you are likely to sweat more, such as after exercise, drinking it during other times is entirely ok for all people and athletes.

Are There Any Other Keto-Friendly Sports Drinks

Gatorade Zero and Powerade Zero may be the most popular keto-friendly sports drinks options people are aware of. Still, there are plenty of keto-friendly drinks that may be consumed while following a keto diet.

Here are a few popular ones available at the local grocery store:

In general, many of the sugar-free energy drinks are keto-friendly, but always check the nutrition facts just in case there are hidden carbs. Additionally, plenty of enhancers are fortified with electrolytes and flavor that can be added to plain water.

If looking to replace electrolytes, I highly recommend the water enhancers, which typically come as powders since they have a more significant amount of sodium and potassium added to them.

Water enhancers, which typically come as powders or sometimes liquid drops, are an excellent keto-friendly way to add flavor to plain water and get a larger bolus of electrolytes. If someone needed a bit of flavor to break up the monotony, this is the way to go with the added benefit of vitamins and minerals.

Some great keto-friendly sports drinks that you may be able to find at your local grocery store are Mio and ZipFizz (usually available at Costco). I'd opt for ZipFizz over Mio if available since they contain a more significant amount of potassium than Mio, but Mio is probably more widely available for individuals.

When coming across any drink, make sure to double-check the nutrition facts to ensure it is keto-friendly.

Below are three specially formulated enhancers with electrolytes for keto dieters.

These drinks are a great way to hydrate in the morning, replenish electrolytes after a workout or a hot day, and those just starting keto to combat symptoms of the keto flu-like nausea, fatigue, and even constipation.

In Conclusion, Is Gatorade Zero Keto?

Gatorade Zero and all its flavors are low-carb as they come with less than 1 gram of net carbs and no calories per 12 fl oz. making it extremely keto-friendly. G Zero is an excellent option for those looking to either add some electrolytes or break up the monotony without exceeding your carb limits and knocking you out of ketosis.

The G2 version is not keto-friendly since it has more carbs and added sugar, which may impact ketosis.

However, if looking for electrolytes, there are much better keto drinks than sports drinks such as Perfect Keto's electrolytes that are more suited for individuals and athletes partaking in a ketogenic diet.

Always check the nutrition information on the back to ensure you're getting the right drink, as I've made the mistake of grabbing the incorrect sports drink before.

Whether looking to build muscles or drop body fat, Gatorade Zero is a great idea that's low in price, highly available, and can add some taste with no impact on ketosis.