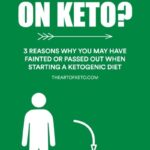 Embarrassing storytime, but when I first started a ketogenic diet, I experienced fainting/passing out for the very first time.

Some individuals may experience extreme lightheadedness and may even faint while on a keto diet due to dehydration and lack of electrolytes. Severe dehydration may further lead to low blood pressure (hypotension), which may cause someone to pass out.

Luckily my pants were up, and the toilet was flushed because I honestly couldn't tell you what happened between being in the bathroom and waking up halfway outside.

In this article, I'll go over why you may have fainted/passed out after starting keto, what you can do to prevent it from happening again, and things you can do if you feel it might about to happen.

Can Keto Cause You To Pass Out?

You may be wondering why did I faint on keto? That can't be healthy…

Three of the major reasons you may have passed out on keto include:

One of the most significant contributing factors why you may have passed out when starting a ketogenic diet is because of dehydration and/or an electrolyte imbalance.

Dehydration and lack of electrolytes

You may be thinking, but I drank tons of water, and this is where both you and I went wrong.

Without sufficient electrolytes, you may have been further diluting and flushing vital electrolytes that are responsible for maintaining fluid balance and blood volume.

If you naturally have low blood pressure, the combination of dehydration and lack of electrolytes may have caused you to faint.

My blood pressure is low enough to where if I'm being tested by someone new, they have to run it twice because they thought the first reading was a mistake.

If you've suffered from feeling dizzy and lightened, or even semi-blacking out when standing from a seated or lying position, you've experienced postural hypotension.

In my case, this may explain the fainting after being seated on the toilet for a while.

Orthostatic hypotension is typically a result of something obvious, usually dehydration or lengthy bed rest. 2https://www.mayoclinic.org/diseases-conditions/orthostatic-hypotension/symptoms-causes/syc-20352548

Dizzy And Light Headed On Keto

Many people often chunk feeling dizzy or light-headed with the keto flu, and that's kind of correct.

The keto flu is often used to explain a variety of symptoms you may experience when first starting a ketogenic diet. It's called the keto flu because many of the same signs and symptoms are shared with the common influenza flu.

Many of these same signs and symptoms of the keto flu all circle back to being dehydrated and not ingesting a sufficient amount of electrolytes.

Why You're Dehydrated And Lack Electrolytes On Keto

When first starting keto, your body is still relying on carbohydrates to fuel its many functions (muscle contraction, brain function, etc.)

As you restrict carbohydrates from your diet, the body is forced to rely on your stored glycogen. As glycogen is used for fuel, the water stored with it is also released.

This is why you may or may not have noticed an increased need to pee when starting keto.

The first week is generally the time you experience the most significant decrease on the scale, because most of it was water loss, with a little bit of fat. It's not unheard of for people to lose as much as 7 or 8 pounds in the first week.

But along with all that water exiting your body is a good proportion of electrolytes, mainly sodium and potassium.

It's extra crucial during the first few weeks to get in extra sodium and potassium to help maintain fluid balance and avoid any adverse side effects, aka “the keto flu.”

You can usually achieve this by making sure to salt your foods liberally, and by also eating keto-friendly potassium-rich foods like avocados and green leafy vegetables.

Another option is to supplement with electrolytes that are fortified with both a good amount of sodium and potassium. Most electrolyte drinks and supplements don't contain nearly enough potassium, but I've listed a couple that does.

How To Prevent Fainting On Keto

Now that you know the reasons why you may have passed out when starting a ketogenic diet, what can you do to help prevent it from happening again?

Get in enough electrolytes

I'm going to keep stressing the importance of electrolytes because they are not only crucial in preventing you from fainting but essential for many bodily functions.

Lack of electrolytes can lead to excessive tiredness on keto, changes in blood pressure, and of course… fainting.

I'd recommend at least 2-3 tsp of salt per day (4-6 grams of sodium) and possibly more if you're highly active or sweat a lot.

And around the same (4-6 grams) of potassium per day from sources such as avocados or green leafy vegetables.

For reference, one avocado contains about 1 gram of potassium, and 100 grams of spinach contains a little over 500 mg of potassium.

Or simply use an electrolyte supplement.

Lay down on your back and elevate your legs

If you feel light-headed or there's a possibility you may pass out, if possible, lie down.

Laying down can help prevent passing out since it allows blood to get to the brain. As you begin to feel better, gradually move to a seated position, before attempting to stand.

Another option is to sit down with your head lowered between your knees. This is another method to help blood get to the brain, though not as effective as laying down.

If you know you'll be standing or seated for a long time, make sure to take frequent breaks to move and get the blood flowing.

You can also try tensing/flexing your legs or crossing them to help improve blood flow.

Dizzy After A Workout On Keto?

If you're mainly only feeling dizzy after working out, it's usually a result of the same primary causes of fainting.

After all, you've just exerted yourself, and if you're like me, sweated buckets… which also means a loss of electrolytes.

Also, your body is shuttling the blood and oxygen to the muscles you've worked, momentarily leaving less for your brain, which leaves you feeling dizzy and light-headed after a workout, especially on keto.

To help resolve the dizziness, try to cool down and rest a few minutes before leaving the gym. Also, make sure you're well-hydrated before, during, and after your workouts.

For a bit of an electrolyte and performance boost, I like to take a teaspoon of salt ~30 minutes before working out. Not only does the sale help retain fluids, but it helps get that pump on keto that many people end up losing and missing.

Additionally, you can also sip an electrolyte beverage during and/or after your workout to replenish what was lost to keep energy levels and hydration optimal.

Still Fainting Or Passing Out On Keto?

If you find that these episodes are happening more frequently, even when addressing the above recommendations, then your symptoms may be a sign of an underlying condition.

Likewise, if these symptoms were present well before you started a ketogenic diet, then you may want to seek medical advice.

Fainting or passing out on keto is usually a result of dehydration, lack of electrolytes, and/or low blood pressure.

When starting a ketogenic diet, your body is going through various changes, and it's vital to remain well hydrated and supplement electrolytes to ensure proper fluid balance.

However, if problems persist or happen frequently, you should seek medical attention as you may be suffering from a more serious underlying condition.