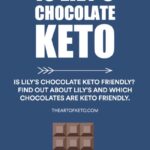 One of my downfalls when it comes to losing weight is undoubtedly my sweet tooth, but especially when it comes to chocolate, especially dark chocolate. Naturally, I wondered whether I could still indulge in chocolate now and then while following a ketogenic diet, and Lily’s was one of the first brands I discovered.

In this article, I’ll go over exactly which of LIly’s chocolate products and bars are keto-friendly and which to be mindful of, the best chocolate to stick to while following a ketogenic diet, the benefits of chocolate, and keto friendly recipes using Lily’s products.

Overall, most of Lily’s chocolate bars are keto friendly. However, there are a few select varieties that have more net carbs than others.

Lily’s chocolate bars can remain low in carbohydrates because their products are sweetened with erythritol (sugar alcohol) and stevia (non-calorie sweetener).

Both erythritol and stevia have a negligible effect on blood glucose. Erythritol has a glycemic index (GI) of 1, and stevia has a GI of 0.

Most individuals following a ketogenic diet usually count net carbohydrates, which means the carbs left after subtracting both fiber and sugar alcohols.

As of writing this article, Lily’s currently has 15 varieties of chocolate bars that they carry under three different categories:

Below is a list of Lily’s chocolate products and the amount of total carbohydrates, fibers, sugar alcohols, and net carbs per serving (30g).

On average, each bar contains two and a half to three servings in total.

While it may not be the best idea to eat the whole chocolate bar at once, the most you would be setting yourself back is 15 grams of net carbs by eating an entire bar of their highest-calorie variety.

However, there are other reasons besides the carbohydrates why you shouldn't eat an entire bar (or two) in one sitting.

Lily’s chocolate chips are produced in the same way as their chocolate bars, with one difference, they’re in chip form. 🙂

This means the chips are also sweetened with erythritol and stevia.

Below is a list of the different varieties of LIly’s baking chocolate chips and their baking chocolate bar with the total carbohydrates, amount of fiber, sugar alcohols, and net carbs per serving (14g).

Compared to the baking chips, the baking bar has the “highest” net carb count with 2 grams of net carbs per serving, which is still relatively low in the grand scheme of things.

Below is a list of the different varieties of LIly’s peanut butter cups with the total carbohydrates, amount of fiber, sugar alcohols, and net carbs per serving of 2 pieces (36g).

What I find interesting is that Lily’s sells bags with multiple cups (6) or in packages of 2, similar to that of Reese’s cups.

Now, what’s interesting is that the cups in the multi-bags use roasted peanut flour as their main peanut butter flavoring, but the two-packs use peanut butter.

In either case, they both contain similar amounts of net carbohydrates per serving as one another.

Below is a list of the different varieties of LIly’s chocolate covered nuts with the total carbohydrates, amount of fiber, sugar alcohols, and net carbs per serving of 1oz. (28g).

Lily’s milk chocolate covered almonds have the highest net carb count relative to the other varieties with 5 grams per serving.

Below is a list of the different varieties of LIly’s caramels with the total carbohydrates, amount of fiber, sugar alcohols, and net carbs per serving (28g).

Out of all of LIly’s chocolate products, the caramels contain the most amount of net carbs per serving. If you choose to indulge in Lily’s caramels, do so in moderation.

How Many Carbs Are In Lily’s Chocolate

On average, Lily’s products contain between zero and six grams of net carbohydrates per serving.

Lily’s specialty products, more specifically, the chocolate covered nuts and especially the caramels, contain the most carbohydrates relative to their other products.

Lily’s chocolate bars and baking chips average between one and three grams of net carbs per serving.

For a full list of net carb counts for LIly’s different products, please scroll up to the appropriate section.

What Is The Best Chocolate For Keto

Most people, including myself, never thought of chocolate as a low-carbohydrate food. Still, when you strip down chocolate to its natural form, cocoa, it is very low in calories and carbohydrates.

Your typical chocolate bar is then mixed with cocoa butter, sugar, and dairy in varying proportions, thus making them what we’ve all be used to enjoying growing up.

Typically, the darker the chocolate, the less sugar it would have. This is why you’ll generally see a percentage of chocolate, especially on dark chocolate varieties.

The percentage written on the packaging indicates the amount that comes straight from cocoa beans. As an example, a 70 percent bar has seventy percent of it coming from cocoa beans, and the remaining 30 percent consists of everything else.

As is the case with Lily’s chocolate, the “darker” the chocolate, the less room for other ingredients, especially their primary sweeteners erythritol and stevia.

When looking for the best chocolate to indulge in while following a ketogenic diet, your best bet is to:

I also list some other options in my article Are Bark Thins Keto?

While chocolate is quite tasty, there may be other reasons to indulge.

Cocoa is rich in polyphenols, especially flavanols, which have been shown to have antioxidant and anti-inflammatory effects. However, due to the processing and heating process, cocoa can lose some of these beneficial properties. 1https://www.ncbi.nlm.nih.gov/pubmed/28824916

The flavanols in cocoa are thought to improve nitric oxide (NO) levels in the blood. Elevated levels of NO are associated with better blood flow and lower blood pressure. 2https://www.ncbi.nlm.nih.gov/pubmed/24915376

Improve blood flow to your brain

Ketones and ketogenic diets show positive effects on neurodegenerative diseases like Parkinson’s and Alzheimer’s. The addition of cocoa in the diet may further aid in the prevention, though more research is required. 8https://www.ncbi.nlm.nih.gov/pmc/articles/PMC6356942/

A study on chocolate consumption in pregnant women found that higher and more frequent intakes of chocolate were associated with improved mood and reduced stress in babies. 9https://www.ncbi.nlm.nih.gov/pubmed/14757265

Yes, in their babies!

With the good must also come the bad.

While not directly related to chocolate, Lily’s products do contain a significant amount of fiber and sugar alcohols, which allow them to have a low net carb count.

Sugar alcohols have been shown to have some benefits, such as:

On the flip side, too much of anything is never a good thing.

Sugar alcohols in some individuals can cause digestive problems when consumed in large amounts. You’ll know if you ate too much because you may experience symptoms like:

If you have irritable bowel syndrome (IBS) or sensitive to FODMAPs, considered refraining from Lily’s chocolate products.

Are you looking for some inspiration to bake with Lily’s chocolate? Here are some recipes sure to tickle your tastebuds.

Use some salted mixed nuts for this recipe or a mix of your favorites. I like to use either macadamia nuts or almonds for these clusters.

Photo and recipe courtesy of Peace, Love, And Low Carb

Chop up Lily’s chocolate bar or use their chocolate chips to make this pumpkin-inspired cookie treat.

Photo and recipe courtesy of Hip2Keto

For those that enjoy RICH treats, this one is for you — using heavy whipping cream (HWC), peanut butter, and some of Lily’s chips making for a surprisingly tasty keto-friendly treat.

Photo and recipe courtesy of Butter Together Kitchen

Where To Find Lily’s Chocolate Near You

Lily’s has gained in popularity over the last couple of years, and I’ve been seeing them pop up at most local grocery stores I’ve visited.

If you want to find a store locally, you can visit there store locator here, but the varieties they carry will differ.

I like to purchase my LIly’s in bulk online, which usually comes out cheaper.

With keto gaining popularity, many other companies have started to come out with there own low-carb keto-friendly chocolates. Below is a list of some alternatives you may want to try:

Lily’s chocolate bars and the rest of their product line is keto friendly with the highest product containing 6 grams of net carbs per serving.

When indulging in Lily’s chocolate products, ensure you include the net carbs in your daily amount and make sure to observe the correct portion sizes per the nutrition label provided.

Want to see what other keto “candy” is keto friendly? Check out my article.