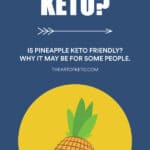 Wondering what you can eat on a keto diet can be a tricky subject to navigate at first. In particular, some might wonder what fruit they may eat that's low in sugar. If you're wondering about pineapples, here's what you need to know.

While pineapples are loaded with nutrients and antioxidants, they are considered too high in carbs to be eaten on a keto diet. A small serving of 100 grams or about 3.5 oz of raw pineapple has 11.7 grams of net carbs, and one cup of pineapple chunks has 19.3 grams of net carbs.

In this article, I'll dive deeper into pineapple, what you REALLY can and can't eat on a keto diet, and what some of the best fruits to eat or avoid are.

Can You Eat Pineapple On The Keto Diet?

Pineapple isn't generally recommended for those following a keto diet due to being one of the fruits that are higher in carbs and sugar. There are much better fruit choices to snack on a ketogenic diet that are low carb or keto-friendly, such as fresh berries.

But remember, they are just BETTER choices than pineapple, not that you can't have tiny amounts of pineapple while on keto, which I'll discuss below.

In either case, they fall on the low end of the keto-friendly scale.

How Many Carbs Are In Pineapple?

Pineapple is one of the fruits that are higher in carbohydrates, there's no denying that, but relative to other fruits, it still lower in carbs than many.

With most people following a low carb diet or keto diet, a small amount of pineapple could potentially fit, but you have to decide if it's worth it to do so. You can think of your carb allotment almost like a budget you get to spend each day.

With most people on a ketogenic diet eating between 20 and 50 grams of net carbs per day, a small amount of pineapple may be worth blowing your budget on once in a while.

And if you have a bigger budget to spend, then pineapple could potentially be keto-friendly FOR YOU. How much sugar or carbs will kick you out is high individual.

When you hear the term glycemic index (GI), it refers to a ranking between 0 and 100 of how a carbohydrate in a particular food will affect blood glucose levels.

A rating of 55 or less is generally accepted as being “low GI,” which means it's more slowly digested, absorbed, and metabolized, which causes a lower and slower rise in blood glucose and insulin levels. 3https://www.glycemicindex.com/

One caveat to the glycemic index is that the rating only applies when the food is consumed on an empty stomach, which isn't how most people eat. Most people eat a combination of foods or still have food digesting from the previous meal.

For those following a keto diet, fat slows down the digestion of foods the most, which would negate most foods' glycemic index.

As you can see, even pineapple on an empty stomach has close to what is considered low GI.

Pineapples have a diverse nutrient profile. They contain trace amounts of vitamins K and A, phosphorous, zinc, and calcium but especially rich in vitamin C.

Along with pineapples impressive nutrition profile, it offers some health benefits worth considering, I've listed a couple for you below.

By helping to break down proteins, they can more easily be absorbed across the small intestine, which helps relieve some of the body's digestive burdens.

Pineapples are rich in flavonoids and phenolic acids, which have been known to reduce the risk of heart disease, diabetes, and even certain cancers. 7https://www.ncbi.nlm.nih.gov/pubmed/24959679

The Truth Of What You Can and Can't Eat On Keto

The real answer is you can eat anything because nothing will inherently kick you out of ketosis. Meaning, it's the total carbs you eat per day, not the food itself, that matters the most.

Some sites will have you believe that even certain ingredients are not “keto-friendly,” and while they may not be desirable to eat too often from a health standpoint, they are not strictly forbidden.

The truth is, even If you eat only low carb fruits and vegetables, if you eat too many of them, it can prevent or knock you out.

The poison is in the dose, meaning the amount of whatever food you choose to eat is the real culprit. Even raising your blood sugar doesn't necessarily destroy your ketogenic diet efforts or prevent weight loss.

Scientific data and my personal experiences, along with many others, will prove this to be true.

When an item is considered “keto-friendly,” it generally means that an item is relatively low in net carbs per serving size.

Sometimes it's just not worth eating a small piece of candy or a few slivers of pasta just because you can, especially when dieting.

It's still better to use your carbs wisely and fill them with nutritious, micronutrient dense foods (most of the time). Not only will this be better for your health long term, but these foods are more satiating, which is vital for those looking to lose weight.

When one uses the reference, it's a metabolic state referred to as “nutritional ketosis.”

When the body is deprived of carbohydrates, ketones, and free fatty acids (FFA) replaces glucose (sugar) as the primary fuel for most tissues. It's when enough ketone bodies accumulate in the bloodstream that we have this metabolic state. 8https://www.ncbi.nlm.nih.gov/books/NBK499830/

It's accepted that when ketones accumulate to a level of above >0.5 mmol/L that one is officially in this state. This can be measured most accurately through the use of a blood ketone meter, and the best time to test for ketones is either first thing in the morning or before a meal at least 3-hours from having last eaten.

Keto doesn't necessarily mean you must eat high fat or that you'll experience weight loss, but it is a term to signify this shift in fuel source that happens as a result of carbohydrate restriction.

What Fruits Can I Eat On A Low Carb Keto Diet?

You may be asking yourself, is any fruit ok on keto? And I have great news. There are low carb fruits that are generally ok to consume in moderation.

If you're looking to add a bit of fruit to your weight loss meal plan, here are my favorites.

Berries, such as blackberries, raspberries, and strawberries are some of the lowest carb fruits per cup that you could consume on keto. They're also quite tasty and filling, which makes weight loss easier.

Making a small fruit salad with a few strawberries and raspberries can be one of the dessert recipes in your keto repertoire. My favorite dessert on keto is unsweetened yogurt topped with a few berries.

Blueberries are on the moderate side since they have more sugar content for the same serving size than the above berries, making them keto-friendly in moderation.

Carambola, also known as starfruit, is not as well known but quite tasty and low carb. One cup (132g) has 9 grams of total carbohydrates and 3.7 grams of dietary fiber, leaving only 5.3 grams of net carbs for a large serving. 9https://nutritiondata.self.com/facts/fruits-and-fruit-juices/1858/2

Not usually associated with being a fruit by many, but it is a fruit none the less. Avocado is a high-fat fruit that's high in fiber, low in carbs, and rich in potassium. If you're having trouble going #2 on keto, I'd suggest avocados before resorting to something like Metamucil, which is also keto-friendly.

Other fruits that are low in net carbs include:

What Fruits Should You Generally Avoid On A Keto Diet?

When it comes to fruits, you should avoid while on keto; here are some of the high carb culprits that you should generally steer away from:

When Is It Ok To Eat Fruits On Keto?

A different version of the keto diet, like a targeted ketogenic diet or carb cycling keto (cyclical ketogenic diet), allows for more carbs and sugar to be consumed.

On a targeted or cyclical keto meal plan, carbs are strategically inserted to help fuel performance and preserve or gain muscle mass. In these specific diets, the total carbs consumed are increased on particular days or times with less keto-friendly options.

However, fat is also lowered on these days to balance things out.

There isn't a black and white answer for who and who shouldn't follow these protocols, but they generally service those who are highly active, such as athletes or individuals looking to build muscle.

Pineapples aren't the highest fruit in sugars, but they aren't the lowest either. They fall on the lower end of the keto-friendly scale, making just a small portion ok to consume as a snack, but very sparingly.

I'd suggest most individuals stick to more keto friendly fruit which includes things like strawberries, tomatoes, avocados, and raspberries.