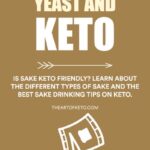 I don't know how I first stumbled across nutritional yeast all those years ago, but I see it becoming more available at local grocery stores. I mean, when Trader Joes makes a version of it, that's when you know it's popular. Nutritional yeast is known for its vast dietary and health benefits, hence “nutritional” yeast, but is it keto friendly?

Nutritional yeast can be included as part of a keto diet without being knocked out of ketosis. Nutritional yeast has only 2 grams of net carbs for a 1/4 cup (15g) serving in addition to being high in protein, containing all nine essential amino acids, and rich in B Vitamins.

Can You Use Nutritional Yeast On A Keto Diet?

Nutritional yeast is quite low in carbohydrates, making it a great supplement or ingredient to use while following a ketogenic diet.

Nutritional yeast is relatively low in carbohydrates for such a high volume.

For a quarter cup of nutritional yeast, you'll be getting only 2 grams of net carbohydrates and 8 grams of protein!

Nutritional yeast is very light and flaky with a taste profile, almost that of parmesan cheese, in my opinion.

The Benefits Of Nutritional Yeast

Also, as I've probably stated numerous times already, nutritional yeast is chock full of B vitamins. Just take a look at how much a 1/4 cup (15g) serving has:

Talk about the ultimate B vitamin, who needs to pop a pill when you can just sprinkle some nutritional yeast on top of your food and fulfill your needs while enhancing the flavor of your food?

Here are some additional benefits of nutritional yeast.

Protein often gets a bad rap in the keto space, but protein is more important than you may think.

I'd argue that protein is the most important macronutrient, and most people are under-eating protein due to fear-mongering from other keto-based websites spreading false information.

Nutritional yeast is a complete protein will all nine of the essential amino acids.

Additionally, if weight loss is your goal, protein is known as being the most satiating macronutrient compared to fat or carbohydrate. Protein also has the highest thermic effect (burns the most calories)4https://www.ncbi.nlm.nih.gov/pubmed/18469287, and higher protein intakes are often correlated with less fat and higher lean mass. 5https://www.ncbi.nlm.nih.gov/pubmed/29405780

When it comes to protein, too much is better than too little, so err on the side of caution.

Cholesterol is often misunderstood, especially as we begin to shed light on the different types of cholesterol, and the vital role it plays within our bodies.

If you're interested in learning more about cholesterol, I would highly recommend you read the website Cholesterol Code.

In terms of cholesterol-lowering, beta-glucan, a carbohydrate in nutritional yeast and also found in foods like oatmeal, may lower cholesterol levels. 6https://www.ncbi.nlm.nih.gov/pubmed/28872611

Nutritional yeast can keep you regular as it's an excellent source of dietary fiber, but don't get too crazy as that can backfire in the opposite direction as well.

I'd argue to say that electrolyte requirements are GREATER when following any low-carb or ketogenic diet.

When eating low-carb, our bodies tend to hold onto less water, thus causing dehydration and symptoms that most people characterize as the “keto flu.”

You may want to also consider an electrolyte fortified beverage like one of the following:

Where Does Nutritional Yeast Come From?

This single-celled organism is grown on molasses and then harvested, washed, and dried to deactivate it to prevent leavening as a baking yeast would.

There are two types of nutritional yeast:

Vitamins are added during the manufacturing process to boost the nutrient content. You'll be able to tell if your nutritional yeast is fortified by looking at the ingredients list.

No added vitamins or minerals are added to the yeast. Only vitamins and minerals that are naturally occurring are in unfortified nutritional yeast.

Fortified nutritional yeast is the most common type you will likely come across at the grocery store.

Will Nutritional Yeast Break My Fast?

If fasting for health benefits such as autophagy, consuming nutritional yeast will break a fast. However, if you're fasting with the sole purpose of fat loss, then if calories are equal at the end of the day, it won't matter if you have a little nutritional yeast during your fasting window.

That is unless it causes you to eat more food than you otherwise would have.

The most important aspect of weight loss is the total daily calories.

Intermittent fasting doesn't offer any significant benefit over regular caloric restriction (multiple meals throughout the day) when the same number of calories and protein is eaten. 11https://www.ncbi.nlm.nih.gov/pmc/articles/PMC6304782/

However, if you prefer to eat in a smaller eating window, and it suits your lifestyle, then keep doing it.

Can Nutritional Yeast Be Cooked Or Heated?

However, a small portion of nutrients is lost during the cooking process.

But that's most foods when you cook them, so it's nothing to worry about.

If it worries you that much, cook or bake whatever it is you plan on and then sprinkle nutritional yeast on top to ensure the maximum amount of nutrients is preserved.

How To Use Nutritional Yeast

There are a variety of ways to use nutritional yeast, but these are some of my favorite ways down below.

Of course, it does have a bit of a “cheesy” taste, so remember that when thinking if it'll go well with what you're trying it on.

But cheese goes well with everything, right?

Thickener for soups and sauces

If you're looking for a thickening substitute for soups or sauces, nutritional yeast can do that for you, plus you'll have the added benefit of extra flavor and nutrients.

Use nutritional yeast as a cheese substitute that's lower in calories and higher in protein, or sprinkle it on top of your favorite keto pizza recipe.

Need some keto pizza recipe ideas? Just check out my keto pizza board on Pinterest.

Here's a recipe from Elephantastic Vegan, though you'll have to substitute the all-purpose flour for something more keto-friendly like almond or coconut flour.

Who Should Not Use Nutritional Yeast?

Even though nutritional yeast is delicious and nutritious (hey, that rhymes), certain people may want to avoid it.

Those that suffer from glaucoma, hypertension, or inflammatory bowel disease (IBD) may experience a worsening of symptoms due to yeast. 12https://www.elephantasticvegan.com/nooch-cheese/

People who have a yeast allergy or sensitivity should also avoid consuming nutritional yeast.

Sufferers of gout may want to avoid nutritional yeast as it may trigger an episode.

Where To Buy Nutritional Yeast

I've seen nutritional yeast in many supermarkets, including Trader Joes.

You should be able to find nutritional yeast in the spices section of the grocery store or even buy it in bulk if your local supermarket sells bulk food items.

Additionally, you can purchase it online and have it delivered to your door:

Nutritional yeast is not only nutritious but delicious and keto friendly.

However, if you suffer from one of the following, it may be best to avoid nutritional yeast: