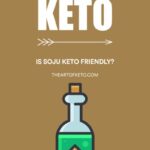 Growing up around a lot of Asians, especially Koreans, I was privy to all the Korean BBQ and Soondubu tofu I could ever want. If there’s anything that you need to round off that perfect Korean meal though, it’s either Hite beer or some Soju.

Distilled or diluted Korean soju is ok while following a keto diet, but it’s best to avoid cocktail or yogurt soju as they generally contain large amounts of added sugar. A standard shot of soju, about 1.7 fluid ounces, will have between 2 and 3 grams of net carbohydrates.

In this article, I’ll go over the different types of soju’s, which ones are keto-friendly, how many carbs you can expect, and more info as it pertains to soju.

Get the FREE Keto Kickstart 2021 program!

Start 2021 off on the right foot. There is also a “VIP” option that includes a bundle of Perfect Keto, plus the chance to win one of 12 grand prizes of $650+ each. Should be fun! Did I also mention it's absolutely free?
Check it out now here: Keto Kickstart 2021

Can You Drink Soju On Keto?

Soju and Korean food have such a harmonious relationship, similar to that of sake and Japanese cuisine.

If you visit Korea, you’ll soon realize that it is a big-time drinking culture, and soju is the fuel. It doesn’t matter if you’re going to a family event or a business meeting, you can be sure there will be some soju there.

Jinro, the leading soju manufacturer, is the most popular liquor IN THE WORLD.

Yes, you’ve read that correctly… in the world.

Whether you’re out dining at a Korean restaurant, visiting Korea, or live in Korea, you can rest easy knowing that traditional Korean soju is keto friendly.

But not all soju is keto friendly. You should stick with either distilled or diluted Korean soju when drinking or dining out if limiting carbs is of top priority.

A good rule of thumb is the higher the alcohol content, the fewer the carbohydrates. The same goes with sweetness, the sweeter the soju, the more carbs it will likely have.

New “fruit” flavored soju’s or yogurt soju should generally be avoided as they contain a relatively high proportion of added sugars.

Jinro produces the Jinro chamisul fresh and original soju, which are two soju’s you’ll likely come across and is keto-friendly. https://hitejinroamerica.com/

Therefore, you can expect to get seven shots per bottle of soju.

Per standard shot of soju, you may expect to get between 2 and 3 grams of net carbs.

How strong is soju?

The most basic Soju will vary between 20 – 24 percent alcohol by volume.

How does soju taste?

Soju, at least in my opinion, is a bit neutral in taste, it’s not sweet as sake, but not as hard as vodka.

I’d almost describe the taste of soju as a “lighter” and sweeter vodka if I had to put it into words. However, it doesn’t have the same kick as vodka due to the lower alcohol content.

This also depends on the grain used to produce the soju.

While most soju is produced from rice, other grains such as wheat and barley, or ingredients like sweet potato and tapioca, are being used to produced soju, giving it a slightly different flavor profile.

How Many Calories and Carbs In Yogurt Soju?

Yogurt soju is becoming popular, especially with the younger crowd, and I get it… it’s tasty,

BUT it’s not keto friendly.

If visiting a restaurant or bar, yogurt, usually Yakult, which has added sugars, along with a soda like 7up or sprite, is added.

Other places get even fancier and turn soju into cocktail smoothies with a variety of fruit flavors.

Therefore, you can expect at least ~10 grams of net carbs for a small 2 – 3 oz shot of yogurt soju. While you could potentially fit in 10 grams of carbs from a single shot or 20 from two, is it worth it?

Maybe, that’s up to you.

Fruit soju contains additional sugars, with each bottle containing an additional ~35 grams of carbohydrates from sugar.

To figure out how many carbs are in each shot of soju, let's take our standard 350ml bottle of Soju that offered seven 50ml shots.

Assuming there are seven servings in the 350ml bottle, the same shot went from 2 – 3 carbs per shot to between 7 and 8 grams of carbs for fruit soju.

Therefore, a standard 50ml (1.7 fl oz) shot of fruit soju will have between 7 and 8 grams of carbohydrates and is around 13 percent alcohol by volume.

A shot or two of fruit soju is manageable, especially for those at the higher end of the carb spectrum.

Most people stay between 20 and 50 grams of net carbs per day, so it’s doable, but doing so will limit the rest of your choices throughout the day.

How Is Soju Made?

The word soju means “burned liquor,” which is a reference to the alcohol being distilled at a very high temperature.

Traditionally, soju is made using a blend of fermented and distilled rice grains.

However, due to a government ban in 1965 during a rice shortage, modern soju moved towards diluted ethanol produced from sweet potatoes and other ingredients.

Soju is consumed neat and slightly chilled. Soju is not like sake where it's served warm or cold.

If dining amongst Koreans, it may be best to know a little Soju etiquette.

As I said, drinking is part of the culture, so how you drink Soju is just as important as the drinking itself.

The Koreans have a word, “Anju,” which means food that is specifically made to be consumed with alcohol.

When dining at a Korean restaurant or in Korea, soju is almost a necessity, at least culturally speaking.

Here are the most popular brands that you are likely to come across, all being generally keto-friendly with 2 to 3 grams of net carbs per shot.

You may be surprised to know that alcohol may increase your ketone levels. 1https://www.ncbi.nlm.nih.gov/pubmed/5456793

But as with anything, moderation is always encouraged.

When consuming alcohol, always have a game plan for what you will eat afterward. We all know that alcohol can often lead to poor decisions, and many of those decisions may revolve around food choices.

I like to always have a keto-friendly snack at home ready for me, because I know I’ll inevitably be hungry.

Soju, the most popular alcohol in the world, is keto friendly. However, it would be best if you generally avoided fruit and yogurt soju as they contain a more significant proportion of added sugars.

When drinking soju out in Korea or with Koreans, remember there is a certain etiquette when it comes to drinking, so now you can impress them with your newfound knowledge.