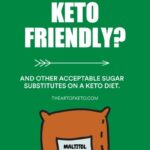 I remember when I first encountered a “sugar-free” product at the store, only to see it sweetened with Maltitol.

My first thought was to search google and social media to see people's opinions on Maltitol and whether or not it was “keto-friendly.”

All I could find was people saying to avoid Maltitol, but nobody explained precisely why, so I did some extra digging of my own.

Is Maltitol Keto Friendly? While small amounts of Maltitol can be ingested on a ketogenic diet, there are better sugar-free sweeteners and sugar alcohols that contain fewer calories and cause less of an insulin response.

In this article, I’ll discuss what maltitol is, the benefits of using it as an alternative to sugar, the drawbacks, and some other alternatives.

So you came across an item at the store, usually a candy of sort that said sugar-free on the packaging, only to find out it sweetened with Maltitol.

First, realize that sugar-free doesn’t mean “calorie-free.” While Maltitol is technically a sugar alcohol, it still contains ~ 2 calories per gram. Maltitol has half the amount of calories as a gram of sugar or carbohydrate, which has 4 calories per gram.

Since Maltitol does contain calories, even though half that of sugar, it will have a glycemic index; therefore, Maltitol does affect blood glucose, just not as high as table sugar.

Like other sugar alcohols, the body doesn’t absorb them completely. Since Maltitol does digest completely, the corresponding blood sugar and insulin rise are slightly negated.

This means, if a product has 10 grams of sugar alcohol from Maltitol, you might consider counting 6 – 8 grams towards your net carbs for the day.

At the end of the day, Maltitol is still a carb. While it's safe to consume maltitol, do so in limited quantities as it counts towards total carbohydrates and may even affect blood glucose.

Maltitol, like many of the other ‘tol’ sweeteners you may have seen, is a sugar alcohol (erythritol, xylitol, etc.). Maltitol comes in granular, powdered, and liquid forms.

Sugar alcohols are naturally found in certain fruits and vegetables and are essentially sugar with an alcohol group attached. Since sugar alcohols are poorly absorbed into the bloodstream, they don’t affect blood sugar as ordinary table sugar would.

Since Maltitol and other sugar alcohols don’t affect blood sugar in the same way, this makes them perfect for companies to use when making “sugar-free” foods or to sweeten items such as:

Are There Any Benefits of Maltitol?

Maltitol Is commonly used as a sweetener because it has the same sweetness of sugar but with fewer calories. Maltitol also doesn't have that unpleasant aftertaste that a lot of that artificial sweeteners tend to have, making it a preferred choice for some companies.

Like other sugars and sweeteners, Maltitol doesn’t seem to cause cavities or tooth decay. This oral health benefit makes Maltitol and other sugar alcohol prime candidates for oral hygiene products like mouthwashes and toothpaste.

Maltitol has a reduced, but not eliminated, effect on blood glucose and insulin levels. However, there may be better sugar-free sweetener alternatives that don’t have as much of an impact, if any, on blood sugar.

Side Effects of Maltitol

Similar to many other sugar alcohols, some people may experience stomach pains and gas. Additionally, for specific individuals, it causes diarrhea and provides a laxative effect.

While not a side effect, Maltitol still does contain carbohydrates and will have an impact on blood sugar. As long as you account for the carbs, you can make it fit within a ketogenic diet, but there may be better alternatives, as I’ll soon point out.

As I’ve discussed, Maltitol still contains carbohydrates and, therefore, calories. As of 2019, there are eight non-nutritive sweeteners approved by the U.S. Food and Drug Administration (FDA).

Non-nutritive means that your body will not be able to digest, absorb, or extract any energy (calories) from them. In my opinion, as long as you don’t hate the taste of them, this makes non-nutritive sweeteners more ideal on a ketogenic diet and for those looking to lose weight.

Aspartame, sold under brand names such as Equal or Nutra Sweet, while demonized in the last decade, is one of the longest and most well-studied artificial sweeteners. There are more than 100 studies that support the safety of aspartame.

Many people like to use stevia as it’s considered a natural sweetener derived from the leaves of Stevia rebaudiana Bertoni, a plant native to parts of South America.

Additionally, stevia does contain some nutrients:

Similar to Maltitol, erythritol is a sugar alcohol but DOES NOT have a glycemic index, and fewer calories. Individuals tend to report less stomach pain or gas with erythritol, but results may vary.

Fillers and sweeteners to look out for on keto:

Since many of the non-nutritive sweeteners are made sweeter than table sugar, they're usually mixed with fillers that may be less than ideal for those on a ketogenic diet. Make sure you look on the back of the packaging to ensure none of the fillers above are listed on your product.

While you can have Maltitol in small quantities while on a ketogenic diet, many other sweeteners may be better alternatives.

While there is no defined amount of how much Maltitol you can have, to get a better idea, I suggest reading my other article to understand how much sugar will kick you out of ketosis.