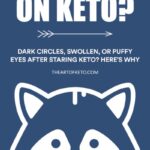 One thing people notice after switching to a ketogenic diet is the appearance of bags or dark circles under their eyes.

You may be losing weight, but at the same time, you may have people commenting that you look a bit more tired these days.

Assuming you’re getting enough sleep, what else could cause this sunken look?

In this article, I’ll go over the different reasons you may have dark circles under your eyes after starting a ketogenic diet and what you can do to help get rid of them.

So you’ve started a ketogenic diet and noticing dark circles around your eyes. Luckily, if you’re a woman, you could at least cover them up with some makeup, I guess you could if you were a guy too.

You might assume it’s just a byproduct of getting older, or maybe you’re not getting enough sleep, but that’s not always the case.

Dark circles under your eyes, mainly if occurring only once starting keto may be attributed to one of these factors:

When switching to a low-carb or ketogenic diet, the chances of you becoming dehydrated exponentially go up.

Without proper awareness or education, many people find themselves dehydrated, even if they THINK they’re drinking enough water.

After switching to a low-carb or ketogenic diet, your body beings to expel pounds/kilos of water that were once held by stored and circulating glucose (sugar) in the body.

Many people also end up wondering why they’re sweating more after starting keto or why they need to pee so much on keto during the first couple of weeks.

Now you know why.

The solution to come in the next section.

Semi-related to the first point above, you may be suffering from a mineral imbalance, most notably electrolytes.

Due to the increased loss of water, your body is also flushing out vital electrolytes (sodium, potassium, and magnesium) that are critical for ensuring proper fluid balance in your body.

Even if you think you’re drinking enough water or increasing it after starting keto, if you’re not retaining any of it, then it doesn’t matter.

Many people who switch to a ketogenic diet end up getting rid of sodium-filled and fortified foods and switching to nutrient-rich whole-foods.

While this is great, you’ve also cut out what may have been the most significant source of sodium you had. Along with eliminating carbohydrates, a lack of minerals can leave you in a bad way.

If you’ve heard or experienced the keto flu, then there’s a good chance you’re suffering from dehydration and a lack of electrolytes.

Along with making sure you’re drinking an adequate amount of water, make sure to salt your foods liberally and eat keto-friendly potassium-rich foods such as avocados and green leafy vegetables.

Another idea you may want to try is supplementing with an electrolyte drink formulated with ketogenic dieters in mind.

While it’s not the best look, you, like myself, tend to lose weight in places you don’t want to.

One of the first places I begin to lose weight is my faces, especially around my cheeks and eyes. While this may be great for some, I already have a naturally lean face, leaving me looking like Skeletor when I lose weight.

Dark circles under your eyes on keto may just be a byproduct of weight loss, which may or may not be a worthwhile trade-off for you.

In the end, I think most people would choose the weight loss over the dark circles, but not everyone.

Solution
Stop losing weight, or wear those dark circles as a badge of honor.

A food allergy or sensitivity

There may be a good chance you’re allergic to something you’re eating, and if not, something else in your environment (cleaning chemicals, pets, etc.).

An allergy is a reaction by your immune system to something that may be harmless to most other people.

Those with allergies usually suffer from multiple substances, which include: 1https://medlineplus.gov/allergy.html

Allergies can cause a variety of symptoms to occur, one of which is dark circles or swollen eyes. At the very worse end, someone may suffer from anaphylaxis, a severe reaction that could potentially be fatal if not treated immediately.

The solution in the following section.

Semi-related to the above, sinus congestion may be a cause of your dark circles.

The sinuses are located just beneath the eyes, and when they become inflamed or infected, it may lead to puffiness around the eyes. There’s also a strong chance you may feel increased pressure around the same area as well.

Sinusitis may lead to what is referred to as “allergic shiners,” congestion in your sinuses leads to blockage in and around the small veins under your eyes. Blood and fluid can pool under your eyes, creating the look of dark circles and/or puffiness.

Any type of allergy can lead to allergic shiners, similar to the list in the above section.

Solution
There is a myriad of solutions you may try for both allergies and sinus congestion, which include:

Look at your mom and dad, do they have bags under their eyes? There may simply be a chance that dark circles, swollen, or puffy eyes are a result of genetics and not your ketogenic diet.

You may have had bags that weren’t showcased before losing weight, but for some reason, the excess pigment in your skin, which is genetic, may be further highlighting the bags.

These dark circles may be what’s called periorbital hyperpigmentation (PH).

Periorbital-hyperpigmentation (try saying that three times fast) is when the pigment under the eye area darkens. PH more commonly occurs in people who have darker skin tones.

While this trait is inherited, it can be made worse through sun exposure.

Solution
Aside from applying SPF to your face every day, you may just be prone to having dark circles.

Thank your mom and dad for that one.

I have to say it, but are you getting enough sleep?

When you don’t get enough sleep at night, blood vessels around your eyes dilate, thus leading to dark circles under your eyes.

There may be a myriad of reasons you’re not getting enough sleep, one of which includes dieting and weight loss, which is a stress in and of itself.

If none of the above reasons seem like they are a likely culprit, you may just need a little more shut-eye.

If you’re experiencing dark circles, bags under the eyes, or extra swelling while on a keto diet or intermittent fasting, there’s a good chance, it may be due to dehydration and a mineral imbalance, especially sodium and potassium.

Make sure you’re staying well-hydrated, adding salt to foods, and including potassium-rich foods like avocados.

You may also try supplementing with an electrolyte supplement like Keto Vitals Electrolyte Powder.

The only other reason I can potentially see dark circles under your eyes explicitly caused by a ketogenic diet may be a food allergy or other vitamin deficiency.

To test for a food allergy, you may want to consider an elimination type diet, and for a vitamin deficiency, it’s best to eat a wide variety of whole and nutrient-dense foods.

Another option is to try supplementing with a multivitamin like Pure O.N.E.