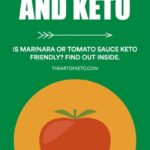 One of the most common missed foods on a ketogenic diet has to be pizza; I know it was for me. However, with the explosion of keto, there are easily 100’s of keto-friendly pizza recipes and pre-made crusts, but what about the marinara sauce? Can you still have that on keto?

Whether someone can have marinara sauce on a keto diet will heavily depend on the brand, although most will be ok to consume. While many marinara sauces have added sugars, the average brand has 6 grams of net carbs for a half-cup serving, making it low-carb enough to include in moderation.

But what should you top your keto-friendly crust with? The cheese is keto-friendly, the toppings are keto-friendly, but what about the sauce? This ultimately led me to search far and wide to find a tomato or marinara sauce I could use, if at all.

In this article, I’ll go over which marinara sauces are best for a ketogenic diet, the difference between marinara and tomato (say what?), the health benefits, and some super easy keto friendly recipes to try out.

Can You Have Marinara Sauce On Keto?

You may be wondering what you can put on your fathead dough or mock spaghetti using shirataki noodles to give it that tomatoey’ flavor you’ve been missing.

Well, I have good news.

You can have marinara sauce on a ketogenic diet, within reason, of course.

Also, I’d like to point out that some brands of marinara sauce are more keto friendly than others. I’ll be sure to point out a few of those brands for you at the end of this article.

How Many Carbs Are In Marinara Sauce?

While different canned marinara sauces will have different carb counts, after reviewing half a dozen different popular brands, here’s what I found.

On average, most marinara sauces have 8 grams of total carbohydrates with 2 grams of that coming from dietary fiber. Therefore, an average 1/2 cup (113g) serving of marinara sauce has 6g of net carbs.

Remember that it is per 1/2 cup and not the entire jar. A whole jar of marinara will have ~6 servings, which means there are 36 grams of net carbs per jar of marinara sauce.

What Are The Health Benefits Of Marinara?

Being that marinara sauce is primarily made of tomatoes, the health benefits of marinara sauce generally stem from the antioxidant lycopene, which tomatoes are a primary dietary source of.

Lycopene has been linked with many health benefits, including reduced cancer and heart disease.

Marinara is also a good source of the following vitamins and minerals:

The main plant compounds in marinara are:

As alluded to earlier, tomatoes are the most abundant source of lycopene, which has the highest concentrations found in the skin. 1https://www.ncbi.nlm.nih.gov/pubmed/24499120

When shopping for tomatoes, you should look for the reddest ones. The redder a tomato, the more lycopene it generally will have. 2https://www.ncbi.nlm.nih.gov/pubmed/10820081

You’ll also be happy to know that processed tomato products, such as marinara sauce, will have much higher amounts of lycopene than fresh tomatoes gram for gram. 3https://www.ncbi.nlm.nih.gov/pubmed/9605205

Lycopene from tomatoes has been linked with the following:

Can You Eat Tomato Sauce On A Keto Diet?

Wait a minute, isn’t tomato sauce the same as a marinara sauce? Not quite.

I thought the same way too, but my tomato soup nazi chef friend (bonus points if you get where that comes from) was quick to point out they are entirely different things!

So what’s the difference, you ask?

Both are indeed tomato-based sauces, but the main differences lie in the ingredients, the method of cooking, and of course, the taste and texture.

On the other hand, tomato sauce is a bit more complex and typically simmered for much longer for a thicker and richer flavor. Tomato sauces can also end up spicy, meaty, cheesy, or insert other adjectives here, which depends on the chef.

Both tomato sauce and marinara use tomatoes as a base, but tomato sauce will typically have extra ingredients.

It’s hard to say whether a tomato sauce at a restaurant is keto-friendly, but since many people have access to canned tomato sauce, let’s focus on that.

However, when eating out, use your best judgment when it comes to tomato sauce. Most commercial tomato sauces are likely to have added sugars.

Is canned tomato sauce keto friendly? Tomato sauce is moderately keto-friendly, depending on the preparation and brand. Most people will be able to fit one to two servings of tomato sauce within their daily carbohydrate budget.

How Many Carbs Are In Tomato Sauce?

While different canned tomato sauces will have different carb counts, after reviewing half a dozen different popular brands, here’s what I found.

On average, most tomato sauce has 5 grams of total carbohydrates, with 1 gram of that coming from dietary fiber. Therefore, an average 1/4 cup (61g) serving of tomato sauce has 4g of net carbs.

Remember that it is per 1/4 cup, and not can. The typical can will have ~7 servings, which means there are 28 grams of net carbs per can of tomato sauce.

Here are a few different brands to illustrate.

What Other Keto Friendly Marinara Sauces Can Be Store Bought?

The first brand I’m going to recommend here is Rao’s. If you haven’t heard or tried Rao’s, then you’re missing out.

If you’re eliminating FODMAP’s from the diet, they also have a sensitive formula without the garlic and onions with only 3 grams of net carbs per serving.

The white linen marinara sauce has 6 grams of carbohydrates per 1/2 cup (113g) serving with 1 gram from dietary fiber, leaving 5 grams of net carbs per 1/2 cup serving.

While I’ve seen Rao’s at markets like Whole Foods or other mainstream grocery stores, it’s usually cheaper online. On the other hand, Victoria’s may be harder to come across at local grocery stores.

If you’re looking to make your own keto friendly marinara sauce, it’s the best way to control the taste and amount of carbs.

Here are a few keto friendly marinara sauce recipes to get you going.

This marinara sauce uses a bit of tomato puree, a little sweetness from erythritol, and a bit of tang from red wine vinegar.

Photo and recipe courtesy of My Keto Kitchen

Not exactly marinara, but still gets the job done. This tomato sauce recipe uses San Marzano tomatoes (my favorite) with a few other simple ingredients.

Recipe by Fioa from Allrecipes

I’m all about that quick and easy life, here’s a video showcasing you step by step how to make a simple marinara sauce.

Put it on a pizza, dip some keto-friendly mozzarella sticks, or put it on some low-carb shirataki konjac pasta.

Want to know other keto friendly foods you can eat with a helpful grocery list? Check out the Keto Diet Foods List and Keto Snacks.

Both marinara and tomato sauce can fit in a well-planned ketogenic diet.

However, you should be mindful as the amount of marinara or tomato sauce can begin to add up and eventually throw you over your daily carb limit.

Most people should be fine fitting 1/4 – 1/2 cup of marinara or tomato sauce per day in addition to their regular ketogenic diet.

If you’re looking for the lowest carb marinara sauce, I’d highly recommend Rao’s with only 3-4 grams of net carbs per 1/2 cup serving.

It’s also one of the most delicious marinara sauces I’ve had straight from a jar.