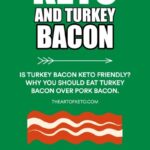 I don't know about you, but sometimes I just want a bit of a leaner bacon. Don't get me wrong, I love me some pork bacon, especially from heritage breed pigs, but I love me some turkey bacon every once in a while as a leaner alternative, but is turkey bacon keto friendly? Here's what I found.

Like pork bacon, turkey bacon may be consumed while following a keto diet and used as an equal substitute in various keto recipes or eaten plain. Most turkey bacon brands range between 0 and 2 grams of net carbs per serving and are lower in calories than its pork alternative.

In this article, I'm going to cover turkey bacon in detail, what it's made of, the nutritional content, why YOU SHOULD eat turkey bacon over pork bacon, and then throw in some keto friendly recipes and some brands of turkey bacon to look out for.

So can you eat turkey bacon on keto? Based on my analysis of all the top brands, turkey bacon is VERY keto friendly. Most brands will have very little to no carbohydrates making it perfectly acceptable to enjoy while following a ketogenic diet.

Turkey bacon is the often forgotten “other” white meat.

Whether you simply enjoy the taste of turkey bacon more than pork, it's easier access or looking to save calories by switching from pork; you can rest comfortably knowing that you can eat turkey bacon on keto.

What Is Turkey Bacon Made Of?

You may be wondering how turkey bacon is made? And that would be a normal reaction. I had that same question.

After all, pork bacon is most known for its fatty slices taken from the pig's belly, so it's natural to ask if turkey bacon is also cut from the turkey's belly?

Turkey bacon is made similar to how a burger is made by chopping or grinding a mixture. Both light and dark turkey meat, along with bits of skin, are blended with seasonings and preservatives before shaping them into what we know as turkey bacon.

You can think of turkey bacon as one-piece thigh, one-piece breast, and one-piece skin to give it the taste, texture, and visual characteristics of pork bacon. 1http://agris.fao.org/agris-search/search.do?recordID=US19920089682

*The above is not exact ratios, but just an example

Relative to pork, turkey is a much leaner meat. Therefore, turkey bacon has fewer calories and fat than pork bacon.

Due to the relatively small serving sizes, the daily value (DV) may seem tiny percentage-wise. However, they are both relatively good sources of B Vitamins, zing, and selenium.

Similar to pork bacon, most turkey bacon will have very tiny amounts of sugar added, that is, unless it specifically states “no sugar added.”

But the amounts are so small that it will not make much difference. If you're worried about small amounts of sugar, then look for no sugar added turkey bacon or give my article below a read.

Additionally, most bacon contains nitrates or nitrites to preserve the meat and enhance color.

If looking for nitrate or nitrite-free alternative, natural or organic versions will often replace the nitrates or nitrites in favor of celery powder, which is a natural source of nitrates. 4https://www.sciencedirect.com/science/article/abs/pii/S0309174007001209

Turkey bacon has a reputation for being the “healthier” bacon, but is turkey bacon healthy?

Healthy is often a subjective matter, as in, everyone has their definition of what “health” means.

For the sake of argument, we'll say we're looking for a food that fits our needs and helps us achieve our goals, sound good?

Most people reading this are probably looking to lose some weight, which results in a myriad of health benefits on its own, regardless of how you got there (to a certain extent).

So who should eat turkey bacon instead of pork bacon? Here are some of the benefits, and if they pertain to you, then turkey bacon would be a good fit.

Despite what you've heard up until this point, calories do matter, and every little bit can add up.

Don't believe me? Ask any competitive athlete or physique athlete whose job it is to manipulate their body weight.

Of course, this is assuming you also like the taste of turkey bacon, which can grow on you even if you currently don't.

There's no point in switching to turkey bacon if you can't stomach the taste. For those that can or enjoy turkey bacon, you'll be consuming fewer calories, thus losing weight at a quicker rate.

It's simple swaps like this that can be easily implemented to shed a few pounds, so long as you don't use it as an excuse to eat 25% more.

Option for those who don't eat pork

Being of Filipino heritage, it's almost unheard of NOT to eat pork, but I get it.

I have plenty of friends who don't eat pork, whether for religious reasons, allergies, or simply don't enjoy the taste.

Turkey bacon can be an excellent substitute for those who still want to enjoy bacon but must refrain from pork for whatever reason.

While it doesn't have the same taste or texture as pork bacon, it still has that smoky, salty, cured flavor one might associate with pork.

Which Bacon Is Better For Keto? Turkey Bacon Or Pork Bacon?

No single bacon is better or worse for keto. You have to take the person and their goals into context.

Should you eat turkey bacon over regular bacon? Well, ask yourself the following:

Most people THINK that you need to eat high amounts of fat on a ketogenic diet. You may have read another website or told by a friend you need “X” percentage of fat, but the truth is that you don't “need” to eat as much fat as you may think.

I'd even argue that most people following a ketogenic diet are overeating fat, which is why people are not achieving the results they are looking for or hitting plateaus much sooner than they should.

The only requirement to achieve and maintain a state of ketosis is carbohydrate restriction, not eating high amounts of fat. Your body is more than sufficient enough to create ketones from your body fat to use as fuel.

Which I'm sure is what you want!

You want your body to eat the fat off your body, but if you feed it too much fat, it won't need to dig into your body fat stores.

When you want to maintain, that may be an ideal time to switch back to pork bacon.

Of course, you can still lose weight eating pork bacon, but this is an example of how a simple swap here and there can go a long way and is much easier to implement than other strategies.

So you've decided to go down the turkey bacon rabbit hole for your ketogenic diet, what can you do with it?

I like to keep things on the easier side, but here's how I like to enjoy my turkey bacon.

First off, you can still have your bacon and eggs, just switch out the pork for turkey.

An easy way to get your kiddos to eat their veggies is to wrap it in bacon! Turkey bacon, that is.

Simply wrap season the asparagus with salt and pepper, wrap it with bacon, then put it on a wire rack on a baking sheet for 25 minutes at 375 degrees.

Don't have a wire rack? Just put it on a baking sheet, no problem.

Want something rich, hearty, and easy to cook? I love this recipe from Delish.com.

Just sub out the pork bacon for turkey bacon.

Photo and recipe courtesy of Delish

Want an easy way to mass cook bacon? From here, you can use it as a topping on salads, burgers, or just pack I for a convenient keto snack on the go.

This is the same way I cook pork bacon, and it always ends up nice and crunchy.

I bake it! There's no need to stand over the stove to watch the bacon and flip it, just throw it in and pull it out when it's done.

Want an even easier way? Try the microwave. Check this video out below.

Almost every brand you find at the store will be keto-friendly, but here are some of the big brand names that you'll likely be able to find at your local grocery store.

So Is turkey bacon keto friendly? It sure is.

Turkey bacon can make a perfect lower-calorie alternative to pork bacon or for those who may be refraining from pork for other reasons.