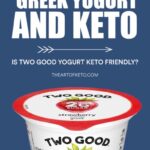 Yogurt, especially Greek Yogurt, has to be one of my favorite foods. Not only is Greek yogurt a great source of probiotics, but it's also high in protein and low in calories, especially Two Good yogurt.

All nine flavors of Two Good Greek yogurt, in addition to plain, may be enjoyed by those who follow a keto diet. There are only three grams of net carbohydrates in each cup of Two Good yogurts, making it a great low-calorie and low-carb snack for those on keto.

When it comes to weight loss, Greek Yogurt is a staple in my food choices due to its low-calorie density but high food volume.

In this article, I'll cover how many carbs are in two good yogurts, how they can get the carbohydrates so low, the health benefits of yogurt, and where to find it.

If any of that is of interest to you, then keep reading…

Two good yogurts ARE keto-friendly, and that goes for every flavor they offer.

In writing this article, Two Good offers nine different flavors and comes in a plain non-flavored.

While Two Good Greek yogurt has fewer carbohydrates relative to other greek yogurt brands, other brands like Fage are also relatively low in carbohydrates. They can fit in a well-planned ketogenic diet.

How Many Carbs Are In Two Good Yogurt?

Regardless of what flavor Two Good yogurts you get, they all have the same nutrition facts.

Each container (150g) of Two Good yogurt has only 80 calories with 2 grams of fat, 3 grams of net carbohydrates, and 12 grams of protein.

What Are The Different Flavors of Two Good Yogurt

How Are Two Good Yogurt Made?

According to the Two Good yogurt website, they have a proprietary, patent-pending batching process that removes most of the sugar naturally found in milk.

Once the batching process removes most of the natural sugars (lactose), Two Good ads in the live cultures (probiotics) and strains the yogurt to separate more of the sugars.

Two Good has their own way of making yogurt, and that's what leaves us with the flavorful, creamy goodness they offer.

Additionally, they add in natural flavors (for their flavored yogurts) and sweeten them with Stevia.

Within the context of a well-formulated ketogenic diet, Two Good yogurt and other Greek yogurts can be relatively healthy.

Some benefits of Greek yogurt include:

Two Good yogurts have live, active cultures, which are added in the creation process.

There is a myriad of long-term diseases that are associated with chronic inflammation, some of which include:

May Protect Against Osteoporosis

Osteoporosis is a condition in which the bones become weak and brittle. The bones may become so brittle that a fall or even a mere cough can cause a fracture.

May Reduce The Incidence of Obesity

Additionally, Greek yogurt is high in protein and rates high on the satiety index. The satiety index is a rating of foods that tests how satiating food is given a particular portion size.

When it comes to losing weight, one of the most significant contributing factors, if not THE BIGGEST, reason people give up on diets is hunger. Including foods like Greek yogurt and other satiating foods can help with adhering to a weight loss diet.

Where To Buy Two Good Yogurt

I've seen Two Good yogurts at a variety of shops thus far. While your grocery stores may vary to what I have locally, you can also locate Two Good yogurts using their online product finder here.

Ideas for Two Good or Other Greek Yogurt

I like to use Greek yogurt in a variety of ways, some of those being:

A dip: Mix Greek yogurt with a little bit of powdered ranch or use it as a dip straight up. This dip works well for veggies or even some pork rinds.

Sour cream replacement: Plain Greek yogurt has a similar texture and taste to sour cream, except it's much higher in protein and fewer calories gram for gram.

Mayo replacement: Again, Greek yogurt can be used as a replacement, this time for mayonnaise. While Greek yogurt doesn't offer the same taste like mayo, you can enhance it with spices and lemon to give it a kick.

Marinade: Many ethnic dishes like Mediterranean or Indian cuisine use yogurt to enhance the flavor of the meat and to tenderize it. The result will have you wondering why you never used Greek yogurt in your marinades before.

Stir into soups: One of my most favorite things to do is mix in a dollop of Greek yogurt into things like chili or chicken soup.

Blended into guacamole: Don't knock it till you try it. Putting a bit of Greek yogurt in your guacamole or chickpea hummus gives it an extra rich and creamy texture. Trader Joes caught on to this phenomenon a long time ago; it's time for you to get on board.

Dessert: A simple dessert I like to make is a bowl of Greek yogurt topped with a few berries (I go for blueberries) and then drizzled with a keto-friendly sugar-free syrup like Walden Farms pancake syrup.

How To Make Your Own Keto-Friendly Yogurt

If you fancy yourself in the kitchen and like to experiment, then making your Greek yogurt can be a great way to save a little money and fully control what goes in your yogurt.

Down below are a couple of low-carb Greek yogurt recipes to get you started.

Additionally, you can follow along with this video as well.

This super simple recipe only has three ingredients and uses the handy dandy instant pot yogurt mode to bring it to life.

The Takeaway Of Two Good Yogurt Being Keto Friendly

Two Good yogurt has fewer calories and carbohydrates than other similar brands of Greek yogurt.

Not only can Two Good yogurt be enjoyed while following a ketogenic diet, but it's also a great way to spice up your food, be used as a lower-calorie alternative, or eaten for dessert.

Next time you're at the grocery store and stop by the yogurt aisle, don't hesitate to grab some keto-friendly Two Good Greek yogurt.