During the first couple of weeks, while transitioning into a state of ketosis, your body is undergoing a whole host of changes. In particular, you may be wondering why you're sweating a little more than usual.

Increased sweating on keto may occur during the beginning stages of a ketogenic diet as the body adjusts to burning fat for fuel. Ketones, especially acetone, are excreted via our breath, urine, and sweat more rapidly at the start of a ketogenic diet.

In this article, I'll explain why you may be sweating more on keto, other signs and symptoms to look out for, and how you can proactively take measures to avoid it. 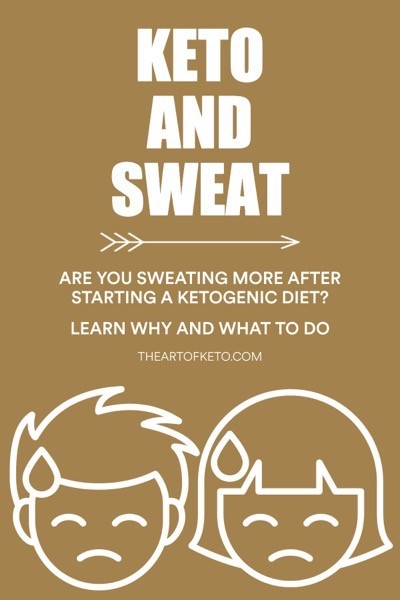 There are a few reasons why you may be sweating more at the beginning of your ketogenic journey.

A common reason why you may be sweating more on keto is what's often referred to as the “keto-flu.” And just how it sounds, the keto flu can result In not only increased sweat production but many of the other flu-like symptoms you would associate with the common influenza flu.

Additionally, when undergoing a ketogenic diet, the body begins producing ketone bodies to supply your brain, heart, and muscles with enough energy while carbohydrates from the diet are restricted. Why is this problematic? Your body has yet to become efficient at utilizing ketones and fat for fuel, also known as keto or fat-adaptation.

Your body produces three ketone bodies: beta-hydroxybutyrate, acetoacetate, and acetone. In particular, acetone is found in larger quantities during the beginning stages of a keto diet but also exits the body more readily due to your body's inefficiency at burning fat for fuel at the start.

Out of the three ketone bodies, acetone, in particular, is excreted from the body through your breath, urine, and sweat glands, which is why alongside increased sweat production, you may also notice a nail polish-like smell to your sweat, breath, and urine.

This inefficiency with using fat and ketones as fuel is a common reason why if you test for ketones using ketosis strips, you may register high levels of ketones according to the ketone level chart on the test strip bottle. After a few weeks, you may start to see lower levels of ketones via the urine test strips as you become more fat-adapted.

If testing to check your ketone levels is of importance to you, I would recommend other forms of measuring ketones. In this case, I would usually recommend using a blood-ketone monitor as it's generally considered the gold standard in all of the published keto research.

Also, while not as prevalent, people in ketosis report increased sweating at night. While the exact reason night sweats may occur, increased sweating at night may be a result of low blood sugar or possibly even sugar withdrawals. According to Mayo Clinic, if your blood sugars drop very low, as is the case in hypoglycemia, a common symptom you may experience is an increase in sweat.

What Is The Keto Flu?

The keto flu is quite common and experienced by the majority of people who start a ketogenic diet. Keto flu is often caused by the massive shift your body undergoes when first entering a state of ketosis, and it's called the keto flu since the symptoms are often similar to the common influenza flu.

Anecdotally, many people have been able to avoid or resolve their flu-like symptoms by making sure they stay well hydrated and increase their electrolyte intake, most notably sodium.

Sodium, in particular, is one of the most important electrolytes to offset the flu-like symptoms. Not only does sodium help regulate proper nerve and muscle function, but sodium also helps to maintain fluid balance in and around your cells.

If carbohydrates from the diet are heavily restricted, the body experiences a massive increase in both a loss in fluid and electrolytes. Carbohydrate restriction may be why you also experience an increased need to urinate more frequently during the first week on a ketogenic diet, which I wrote more about here.

An average human adult is capable of storing 500 grams of carbohydrates in the form of glycogen. Think of glycogen as a reserve your body has to supply your muscles and brain with quick energy when it needs to.

With every gram of carbohydrate the body stores, an additional three grams of water is stored with it. As glycogen's depleted during a low carb or ketogenic diet, water stored with carbohydrates is released and eventually expelled from the body, mostly through urine, but also through your sweat glands.

Think of each gram of carbohydrate like a sponge that can soak up a maximum of three grams of water. When the body uses up the carbohydrate, it’s like squeezing the water out of the sponge.

Many of the keto-flu symptoms share similarities with the common flu such as:

Often, if you're experiencing a noticeable increase in sweat production while following a ketogenic diet, you might also be experiencing some other commonly related symptoms, which I'll outline below.

Other Ketosis Symptoms You May Notice

If you're sweating more on keto, I find that often, you may also notice some other symptoms that can be closely related, which I've outlined below.

Electrolytes are vital and heavily involved with many processes of the body, one of which includes muscle contraction, and arguably the most important muscle of them all… your heart.

If you're experiencing an increased heart rate on keto, you can learn more about why that happens, and what you can do about in the article I wrote.

Not only is your body expelling more fluids through your sweat, but you may also be noticing more frequent urges to urinate. Water binds to carbohydrates, and when we severely restrict carbs, the body will naturally hold onto less water.

Large drop on the scale

The most common reason people start keto is that they want to lose weight; more specifically, they want to lose fat. While a significant drop on the scale can be quite the motivator, most of the initial weight loss in the first and even second week of a ketogenic diet is water weight.

If you've noticed a considerable drop on the scale during the first week and wondering why it may have slowed down considerably in the following weeks, don't be alarmed. Generally, I wouldn't consider using the scale to track fat loss until after the first two to three weeks. It's after this period when things begin to normalize, and the number on the scale is more indicative of fat being lost rather than water fluctuations.

Unrealistic expectations are a common reason people panic and either give up on their diet or make significant adjustments when it's not necessary. Here are other reasons why you may not be losing weight on keto.

Keto breath is quite familiar to many who start a ketogenic diet. For the same reason that you may notice a nail polish remover-type smell to your urine or sweat, the same applies to your breath. Keto breath, as it's referred to, is a result of a particular ketone body, specifically acetone, being excreted.

Acetone is excreted through your urine, breath, and sweat at higher rates during the first weeks of a ketogenic diet. When first transitioning to keto, the body isn't as efficient at using fat and ketones for fuel. Keto breath will often reduce significantly or entirely once you become keto-adapted.

While many of the symptoms will resolve on its own over time, it can still be quite annoying. So how do you cure excessive sweating in the meantime? Here are a few tips.

One of the best things you can do to reduce the amount you sweat and resolve any keto flu-like symptoms is to increase your electrolyte intake, most importantly, sodium.

Sodium, in particular, plays a crucial role in maintaining proper fluid balance within your body and can easily be lost through excessive sweat, urination, or a combination of both. Maintaining adequate electrolyte levels can easily be achieved by making sure you salt your food liberally and to taste.

Wearing lighter, looser, and more breathable fabric clothing can make a big difference when it comes to sweat, especially in warmer climates. Dressing with proper ventilation and light colors is an excellent way to help reflect sunlight and keep your body cool simultaneously.

While a good cup of coffee (or three) is a great way to start our mornings, caffeine is a diuretic. Caffeine can potentially dehydrate us and also cause an increase in sweat.

Try to cut back on your coffee intake or perhaps make the switch to decaf and see if it make any difference. Of course, if cutting your coffee consumption down or cold turkey is worth the trade-off.

Not usually the case for most people, but drinking too much water can cause excessive sweating. When you drink too much water, your kidneys have to work overtime to get rid of this extra fluid, which can be released as sweat.
It can also be said that you may be low in electrolytes, which would help retain the fluid you do drink.

Sometimes you've given your body enough time to adjust, tried all of the tips outlined above, and still find your sweating levels bothersome, what should you do? In this case, you may want to consider talking to your doctor about potential treatments.

Given enough time, the excessive sweating and other symptoms you may be experiencing tend to resolve on their own.

However, if you've been in ketosis for more than a few weeks or months and still experiencing excessive sweating, there may be another underlying reason. In that case, you should consult with your doctor to find out the reason why and potential courses of action you can take to help resolve the issue.