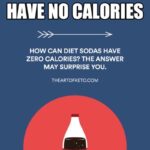 One thing I’ve always wondered is how items can have so little calories, better yet, how some things have NO calories.

Seriously, how can a can of coke have 140 calories, but a Coke Zero, which tastes nearly the same, has no calories at all. After doing a little bit of digging, I’ve come up with some interesting information.

How can diet sodas have no calories? Foods and drinks which contain less than five calories per serving size are allowed to claim calorie-free or no calories on the label.

In this article, I’ll go over how many calories REALLY are in diet sodas, whether diet sodas have adverse effects, and all other questions people have been asking.

Without getting too science”y,” let’s say that a 12-ounce can of Diet Coke does have calories, despite what the nutrition label says.

According to the U.S. Food And Drug Administration, anything that contains less than five calories per given serving may use such labels as:

The most common 12-ounce diet cans of soda contain ~125 mg of aspartame. For reference, one packet of equal has 37mg of aspartame, which means each can have a little less than four packets worth of equal.

In short, aspartame has some amount of calories, though it is negligible at best.

Therefore, when broken down, a 12-ounce can of diet soda still has less than 0.03 calories. With a negligible amount of calories, way below 5 in this case, allows soda manufacturers to list the diet soda as having zero calories.

Although, technically, they could have had up to 4.9 calories and still listed zero calories on the label.

By comparison, a 12-ounce can of regular soda has 140 calories, 5000 times more than its diet counterpart.

Most commercial diet sodas are sweetened with aspartame.

Out of all the sugar-free sweeteners, aspartame is the most exhaustively studied with over 100 studies that support its safety.

Presently, some companies are coming out with different sweeteners, such as Sucralose, commonly known by Splenda.

Now, more companies are starting to incorporate “natural” sweetness, such as Stevia or sugar alcohols like erythritol.

How Does Aspartame Have No Calories?

Aspartame contains close to zero calories, but it does have some calories.

Aspartame consists of one molecule of aspartic acid chemically bound to a phenylalanine molecule, which is then linked to a methanol molecule.

Aspartic acid and phenylalanine are amino acids, which are the building block of proteins. Therefore, we can think of aspartame as a tiny protein.

Since aspartame is about 200 times sweeter than sugar, much less is needed to sweeten food and beverages. You won’t even come close to using 1 gram of aspartame in anything; otherwise, you would end up with something sickly sweet.

Though not life-threatening, nobody likes to feel or look bloated and uncomfortable.

However, there’s no scientific evidence to suggest that diet sodas would lead to water retention.

If you’re mistaking water mention for general bloating and gas, it could be the carbonation in the sodas.

There’s also the possibility of gas and bloating if you’re drinking a brand of diet soda that contains sugar alcohols (anything that ends in “-ol,” such as erythritol.

Sugar alcohols cause digestive issues in some people, though the amount may vary from person to person.

Many of the popular sugar-free energy drinks, keto snacks, and new diet sodas are starting to incorporate more sugar alcohol in favor of non-nutritive sugar substitutes.

If anything, the caffeine in soda acts as a mild diuretic.

Many people naturally question whether diet sodas are too good to be true, and you’d be great to question this logic.

I get the question of whether diet soda is fattening, or more particularly, does diet soda cause belly fat?

And the answer is no… but yet… so please hear me out.

There’s a lot of speculation on whether or not sugar substitutes are linked to obesity and/or weight gain. While there’s nothing in the current scientific literature that proves this to be accurate, it may indirectly be causing weight gain.

Since the primary regulator of weight change (weight gain or weight decrease), is regulated by calorie balance, the only way for you to gain weight or increase belly fat is by the overconsumption of calories.

One of the ways diet sodas may contribute to overeating is that artificial sweeteners, such as those found in diet sodas, may increase motivation to eat more.1https://www.ncbi.nlm.nih.gov/pmc/articles/PMC2892765/ Meaning, for certain individuals, consuming artificial sweeteners can be triggering, causing them to consume more food.

However, if being mindful, and consumed in moderation, diet sodas can be an excellent alternative for those looking to fulfill that craving while saving calories.

So long as you’re not overeating while consuming diet sodas, there’s no need to worry about increased weight gain.

Will Diet Soda Break A Fast

With the popularity of fasting and intermittent fasting these days, one of the questions I get asked most about is if diet soda will break a fast.

And again, context is important here.

Ask yourself what your main goal is:

If your goal is strictly weight loss, then it really won’t matter if you drink a diet soda during your fasting period. At the end of the day, your total calories will be the ultimate predictor of weight loss. 2https://www.ncbi.nlm.nih.gov/pmc/articles/PMC6304782/

On the flip side, if your goal is to reap all the benefits of fasting and intermittent fasting for HEALTH purposes, your best bet is to skip the diet soda.

I’d also argue that any beverage, except for water, will break a fast.

Can Diet Soda Cause Headaches

Another common concern with diet sodas, and especially the artificial sweetener aspartame is headaches.

To the present day, there are no scientific studies that prove aspartame or any diet sodas will cause headaches.

HOWEVER, there is one review that suggests large amounts of the sweetener could trigger or make headaches worse in people who are already susceptible. 3https://www.ncbi.nlm.nih.gov/pmc/articles/PMC5617129/

If you're someone who already suffers from headaches or has a headache, possibly skipping on that diet soda may be a good thing.

Can Diet Soda Cause Dehydration Or Will It Hydrate You?

A lot of diet sodas contain small amounts of caffeine, which does act as a mild diuretic.

However, as with coffee, you’re probably drinking more fluid than you would be expelling (peeing).

Diet sodas get a bad rap, but they can be hydrating for many individuals.

So no, the diuretic effect of diet soda will not outweigh the hydrating aspect. At the same time, you should be making sure you’re also drinking adequate amounts of other fluids aside from diet soda, especially water.

Can Diet Soda Cause Acne?

Acne happens when the oil glands are activated, and cells close to the surface block the openings of these glands.

As oil builds up underneath, it stimulates bacteria to multiply and cause surrounding tissues to become inflamed.

While there is plenty of speculation about diet soda or caffeine on being a cause for acne, there’s not one scientific study to suggest it may be a cause.

There are plenty of websites that say diet soda can cause acne, especially cystic acne.

I say, where are your sources?

That’s right because they don’t have any.

While diet sodas state having 0 calories on the nutrition label, the truth is they do contain very minimal amounts.

Aspartame, which is the primary sweetener in most diet sodas, is 200 times sweeter than table sugar and is technically a protein. This allows products sweetened with aspartame to be virtually calorie-free since not much has to be used to sweeten items.

According to the FDA, any product that has less than five calories is allowed to claim calorie-free.