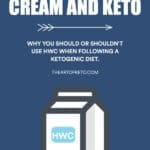 HWC is an acronym commonly used for Heavy Whipping Cream by those following a keto diet. HWC is very low carb with only 1 gram of net carbs per tablespoon, which shouldn't disrupt ketosis, and used in many keto recipes in addition to a replacement for milk in coffee.

If you miss having that splash of milk or half and half in your morning brew while on keto, HWC is an excellent alternative, and much tastier. At least in my humble opinion.

In this article, I’ll go over what HWC is, ways to implement it on your keto diet, and other benefits of heavy whipping cream.

Heavy Whipping Cream (HWC) is considered a safe food when it comes to keto.

When following a ketogenic diet, people are always looking for alternatives to save a few carbs here and there.

One the easiest and quite flavorful, substitutions you can make on a ketogenic diet is using heavy whipping cream where you may have used regular milk previously.

One Tbsp of HWC has less than 1 gram of net carbs, and when it comes to using heavy whipping cream, a little bit goes a long way.

Now, I wouldn’t go as far as drinking a glass of HWC, even on keto. Heavy whipping cream is still very calorically dense, and therefore should be used sparingly.

If you want to save a few calories, half and half may be a good alternative.

HWC is primarily fat, making it high in calories. What people fail to realize is that heavy whipping cream is also full of vitamins and minerals. According to the USDA food database, HWC contains: 1https://fdc.nal.usda.gov/fdc-app.html#/food-details/170859/nutrients

What Is Heavy Whipping Cream?

HWC is the thick part of milk that rises to the top due to its high-fat content. Relative to other dairy products, heavy whipping cream has one of the highest fat contents.

If you want to get technical, heavy cream and heavy whipping cream are mostly the same, but if the product says only whipping cream, the fat content is slightly less.

Heavy cream and HWC must contain 36% milk fat or higher while whipping cream will generally have somewhere between 30% to 35% milkfat.

Ways To Use Heavy Whipping Cream On Keto

When it comes to using HWC on keto, there are plenty of options, but the most popular ones seem to be the following.

Many people following a ketogenic diet drink keto or bulletproof coffee as a morning pick me up or a breakfast replacement.

Traditionally, keto coffee is filled with MCT oil and butter then blended to make a creamy, rich beverage that offers some people a mental boost, suppresses their appetites, or both.

HWC can be used to replace either the MCT or butter or both if you’re like me.

Say what? Yes, you can have ice cream on keto! Low-carb ice cream that is.

HWC is a great way to make a creamy, luxurious keto-friendly ice cream treat. Here is one of my favorite recipes:

If you’re someone who enjoys shakes or smoothies, HWC can be a great base substitute for milk. I like to mix up a sugar-free sweetener, a few berries (or an avocado), a few cubes of ice, and heavy whipping cream or reddi whip for a creamy, rich treat.

HWC is the perfect way to make hearty-rich soups or sauces like Alfredo sauce. Here is an example of one of my favorite recipes for keto-friendly broccoli cheddar soup.

Photo and recipe courtesy of Yummly

What better way to use HWC then what it was intended for in the first place! While it may be easier to make some whipped cream using a Kitchen Aid, you can also do so by hand.

Make sure the cream is cold and toss it in your mixer, or whisk it by hand.

But don’t say I didn’t warn you.

Put some whipped cream on your favorite keto-friendly recipe, a few berries, or a keto cookie as a treat.

Want to know the secret to fluffy eggs that many high-end restaurants don’t tell you? Well, you guessed it… CREAM. Not only will HWC make your eggs more creamy and fluffy, but it enhances the taste.*

HWC is a great way to make keto-friendly bread and desserts for those occasional treats. Heavy whipping cream will help make cakes richer and keep the dough moist.

Can you say cheesecake? Yes, please.

Photo and recipe courtesy of The Struggle Is Beautiful

Does HWC In My Keto Coffee Break A Fast?

Another common question I commonly receive is whether or not HWC in keto coffee or keto coffee in general breaks a fast, and the answer to that would be a resounding YES.

Now, if your goal with the fast is to lose weight, as long as you input your coffee with heavy whipping cream into your keto macros and calories, then having some HWC is no big deal.

However, if the primary purpose of your fasting is for autophagy and other health-related benefits, then you’re better off skipping anything in your coffee.

If autophagy and longevity is your MAIN reason for fasting, I’d care to argue that you shouldn’t even be drinking coffee, and only having water during your fasting period.

When it comes to fat loss, your total caloric balance at the end of the day, better yet, week, will play a more critical role than if you practice keto and intermittent fasting.

How Much Heavy Whipping Cream Can You Have On Keto?

How much HWC you can have per day while following a ketogenic diet will depend on the individual.

Remember that HWC is calorically dense, and when it comes to weight loss, more specifically fat loss, our goal is to reduce calories.

How much HWC you can have while on keto will depend on how many calories and macros you have and where HWC may fit into those numbers.

Don’t know how many calories or macros to eat on your ketogenic diet? Check out my keto macro calculator to get a starting point individually tailored to your goals and stats.

Other Potential Benefits Of HWC On Keto

In one study, the participants with the highest intake of full-fat dairies, such as kefir, were less likely to be obese than those who reported lower intakes. 2https://www.ncbi.nlm.nih.gov/pubmed/25159495

HWC can serve as a versatile ingredient in your keto arsenal.

There are many great uses of heavy whipping cream from keto coffee to ice cream.