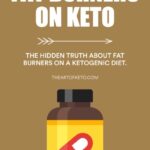 We all want to lose weight as fast as possible. It's no wonder why there are hundreds, if not thousands, of fat burners on the market. Naturally, you're wondering if you can combine fat burners with keto to help speed up weight loss, but should you?

Can I take fat burners on keto? Fat burners may be taken on a ketogenic diet without knocking you out of ketosis. Most fat burners offer very little in terms of effectiveness, but fat burners like caffeine are thoroughly studied.

In this article, I'll go over what fat burners will help increase your weight loss, which ones to stay away from, and other helpful tips to speed weight loss while in ketosis.

Fat burners won't help you magically lose weight, at least not legal ones. No amount of supplements in the world will help you lose weight if you're overeating.

First and foremost, you must burn more calories than you consume to lose weight.

Think of fat burners as icing on the cake after you've nailed down your diet and exercise. If you're not exercising, you can probably increase your weight loss on keto more with a short 15-minute walk than with any supplement.

That aside, fat burners shouldn't knock you out of ketosis if that's what you're worried about. Of course, if the fat burner is a sugar-filled drink, you may get knocked out of ketosis in addition to negating the effects with the extra calories.

What about carb blockers on keto?

First, if you're on a ketogenic diet, then you shouldn't need carb blockers as you are already restricting them through your diet. Second, there isn't a great deal of scientific evidence that carb blockers do much, if at all.

In theory, carb blockers work by inhibiting the production of enzymes responsible for digesting carbohydrates. If you can't digest the carbohydrate, you don't get any calories from them, and they should pass out the other end.

Not a strategy I would probably rely on.

So you have your diet and training in order, what fat burners work? Most fat burners on the market are a mash-up of different ingredients that don't offer much benefit mixed with caffeine.

By increasing your metabolism through fat burners, you burn more calories, at least that's the goal.

Here are supplements that may be worth considering.

The Top 3 Keto Fat Burners Back By Science

Not all supplements are created equal, and most supplements do nothing at all. For this reason, I've listed the top supplements that may help speed up your weight loss on keto based on three key factors:

Most' fat burners' on the market contain a bunch of ingredients, but the main ingredient is usually caffeine. That's because caffeine is one of the only supplements that has a large body of evidence supporting its use.

In essence, DIT if the caloric cost of processing food, in this case, caffeine. DIT is another term used to describe the thermic effect of food (TEF). TEF is the calories we expend digesting and processing the foods we eat and drink.

One cup of coffee or caffeine pill every other hour throughout the day has the potential to burn 150 extra calories. Of course, caffeine's effectiveness and tolerance vary from person to person.

Excessive caffeine supplementation has been shown to decrease sleep quality, which potentially has a more significant effect on fat loss and muscle gain compared to what a supplement can offer. If you're sensitive to caffeine, you may want to skip on the coffee or cut it off early in the day, so it doesn't interfere with your sleep.

Green tea extract, most notably EpiGalloCatechin-3-Gallate (EGCG), is the most abundant and active catechin polyphenol in green tea. Aside from the health benefits of ECGC, there is some evidence supporting its use for fat loss.

One study examining the effects of green tea supplementation used three groups, green tea, and caffeine combined, caffeine by itself, and a placebo with neither caffeine or green tea extract. Researchers found that the group consuming EGCG showed a four percent increase in energy expenditure at rest compared to caffeine supplementation alone.3https://www.ncbi.nlm.nih.gov/pubmed/10584049

Another study over 12 weeks compared caffeine and EGCG to caffeine alone. While results were not statistically significant, the group stacking the green tea extract with caffeine lost more abdominal fat (~7.7 percent vs. ~0.3 percent).4https://www.ncbi.nlm.nih.gov/pubmed/19074207

Insulin inhibits yohimbine's effectiveness, which makes it a great supplement on a ketogenic diet where insulin is kept low. Still, it's probably best either on an empty stomach or at least 2 to 3 hours after a meal stacked with caffeine before doing cardio.

Another thing to note, there's no need to worry about “stubborn fat” until you've gotten to relatively low body fat levels where the majority of the fat remaining are those stubborn fatty areas. Additionally, it may also lead to increased anxiety and increased heart rate in some individuals.

Exogenous ketones may help you lose weight by decreasing your appetite, causing you to eat less. One study had subjects take a ketone ester drink after an overnight fast compared to a sugar-filled drink.6https://www.ncbi.nlm.nih.gov/pmc/articles/PMC5813183/

The group who ingested the ketone ester experienced 50% less hunger, which was attributed to lower levels of the hunger hormone ghrelin.

Aside from reducing appetite, it wouldn't seem that exogenous ketones offer much when it comes to actual fat burning or increasing the metabolic rate. However, exogenous ketones and ketone esters are still be studied.

While not a “supplement,” fasted cardio doesn't seem to have any benefits in terms of overall fat loss. However, fasted cardio, in addition to the supplements listed above, may aid in mobilizing and burning stubborn fat when you get to those last few pounds.

Supplements: Putting it all together

When it comes down to it, very few supplements have the scientific backing to show any efficacy. If I had to put my money on one supplement in terms of effectiveness, it would be caffeine followed by green tea extract, then yohimbine for the very last few pounds.

How To Speed Weight Loss In Ketosis

The most significant impact on how fast you lose weight ultimately comes down to diet, followed by non-exercise-activity-thermogenesis (NEAT), the thermic effect of feeding (TEF), and then physical exercise (PA).

NEAT or non-exercise activity thermogenesis is all the activity you perform throughout the day that isn't formal exercise (lifting weights, cardio, etc.). NEAT is everything you do that expends calories, such as tapping your feet, walking the dog, doing the dishes, walking to your car, etc.

Most of us wouldn't think of these activities as ways to burn calories. Still, evidence shows that all of the little things we do every day add up and make a considerable amount of your total daily energy expenditure (TDEE). NEAT can vary as much as 2,000 calories between people with similar heights and weight.7https://www.ncbi.nlm.nih.gov/books/NBK279077/

All things equal, this may be why a friend of similar build may lose weight quickly, eating roughly the same amount of calories.

NEAT is also a significant reason why weight loss begins to slow down as you lose weight. Aside from expending fewer calories due to moving a smaller body, you subconsciously start to move less and less.

Losing weight isn't exactly something your body wants to do. As a result, one of the ways your body tries to outsmart you is by decreasing your energy, causing you to move less.

One effective method I've found to monitor your NEAT is by using a daily step count using your phone or another fitness tracker such as an Apple Watch or Fitbit.

For example, If you currently average 4,000 steps per day, try aiming for 6,000 steps per day. At the very least, maintain your step count to ensure it's not one of the reasons you're no longer losing weight on keto.

Parking a little further, walking to the grocery store across the street instead of driving, taking the stairs instead of the elevator, or even playing a little extra with your children and pets begin to add up.

NEAT is an easy way to expend calories that doesn't require any formal exercise, nor is taxing on the body.

Picking up a hobby you've been putting off or finally getting around to mowing the lawn and doing your spring cleaning are easy ways to expend calories.

Remember, dietary-induced thermogenesis (DIT) from our caffeine talk? It takes energy to digest food (TEF), and protein is the most costly macronutrient when it comes to digestion at 20 to 35 percent of its calories lost through digestion.

Compare protein to fat, which only has a DIT of 0 to 3 percent, and that's a significant difference. Protein contains nitrogen, which is removed before amino acids can be put to use for energy-demanding processes, which makes the DIT of protein so high.

Consider exchanging some of your fat grams for protein grams in a 1:1 exchange. You may even exchange 2 grams of protein for 1 gram of fat since fat has nine calories per gram, and protein contains four calories per gram.

Most people on ketogenic diets are under-consuming protein as it is. Head to the keto macro calculator to get a general ball-park of how much protein on keto you need and to calculate the rest of your macros.

Just remember, too much protein is better than too little.

Protein also produces the highest satiety of any macronutrient, so it's a win-win.

Altering your diet, most notably, your total calories will have the biggest impact with Increasing weight loss on keto.

Sometimes we take fat burners in an attempt to speed up the process, but how fast should you be losing weight?

While you may see rapid weight loss during the first couple of weeks on a ketogenic diet due to glycogen and water loss, weight loss inevitably slows down. How fast you lose weight versus how quickly another person loses weight will vary based on a lot of different factors.

For a 200 pound individual, you would be looking at losing between one to two pounds per week. By auto-regulating weight loss to a percentage of body weight per week, weight loss will scale down as you become smaller.

Losing at too fast of a rate is generally unsustainable and increases the risk of muscle loss. Muscle loss not only slows your metabolism but often leads to looking “skinny-fat,” which is opposite of what you're probably after.

There's a time and a place for faster weight loss, such as meeting a deadline or kickstarting a diet, but as a general rule, one percent per week is a good starting point.

In reality, “fat burning supplements” pale in comparison to altering your diet and exercise. However, they do have their place and may make a small difference if your diet and training are in order.

The most notable fat burner to compliment your ketogenic diet is caffeine, followed by caffeine with green tea extract (ECGC) and saving yohimbine for stubborn fat at the tail end of a diet.

Have any questions about any other fat burning supplements? Leave them in the comments down below.