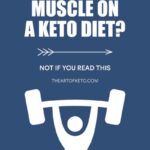 The real reason why you're losing muscle on a ketogenic diet

There is an increased demand for protein during the initial few weeks of a keto diet that may lead to muscle loss. Different factors, such as resistance training, rate of weight loss, and sleep, can also affect muscle retention when dieting and should be addressed.

When first starting a ketogenic diet, your body is undergoing many changes. The transition to ketosis can affect your strength in the gym and even cause you to lose some of that hard-earned muscle if you're not careful.

In this article, I'll go over why you may be losing muscle on a ketogenic diet, how to transition correctly, and the right way to train to not only lose fat but build muscle while living a keto lifestyle.

Why You're Losing Muscle On Keto

There are a few reasons people typically lose muscle while trying to diet to get lean. However, keto adds in another layer of complexity that may cause you to lose muscle even quicker if you don't know how to counteract them.

When you first transition to a ketogenic diet, your body's protein requirements go up. The brain's primary fuel source up until now has been glucose (sugar), and while it can and will utilize ketones, it hasn't yet “adapted” to use them efficiently.

Before you become keto-adapted, your brain's requirements for glucose must still be met. In non-ketotic states, the brain uses roughly 100 grams of carbohydrates per day. This requirement is met through the process of gluconeogenesis in the early stages of a ketogenic diet.

During this period, usually one to three weeks, your body drastically increases the production of glucose from protein and other substrates through a process called gluconeogenesis. In the beginning, the brain is incapable of using ketones for fuel.

Eventually, your brain adapts to using ketones as time passes. Ultimately, the brain will derive ~75% of its total energy from ketones, with the remaining coming from glucose made by the body.

Without sufficient dietary protein, the body undergoes a negative nitrogen balance and begins breaking down tissue to supply the required amino acids to undergo gluconeogenesis. When the body is in a positive nitrogen balance, your body experiences growth and tissue repair.

So, therefore, our goal during this period is to maintain a positive nitrogen balance.

… and this is where people go wrong.

When individuals switch to a ketogenic diet, they are often told that protein is bad and will prevent or kick them out of ketosis. Not only that, but you may have found information on the internet that had you limit your protein intake to a certain percentage of total calories.

Which is also incorrect.

If the answer isn't apparent, it's of course not. Instead, protein requirements should be individualized and based on your total lean body mass (LBM), not a percentage of total calories.

Lean body mass (LBM) is calculated by taking your total body weight and subtracting your fat mass. For example, if you're a 180 pound male at 20% body fat, then you have 36 pounds of fat, leaving 144 pounds of LBM.

Under normal dieting circumstances, protein would be set at 0.8 – 1.2g/lbm, but due to the increased protein demand in the first few weeks of a ketogenic diet, you could argue that this should be even higher.

Regardless of size, a protein intake of ~150 grams per day should be sufficient to achieve this nitrogen balance during the first two to three weeks of a ketogenic diet. After the first three weeks, protein may be brought down to 0.8 – 1.2g/lbm

I get it; you want to lose the fat as quick as possible. Ask yourself, if it took you three months or a year, would it really matter?

Of course not, you'll never look back and think about how long it took you to lose the weight. The only thing that would matter is you lost the weight, and if you did it without a shotgun approach, hopefully, built up great habits and changed your lifestyle to keep the weight off.

That said, there's a time and a place to lose weight quickly, some of which are:

In which case, something like a protein sparing modified fast (PSMF) may be ok for a small group of people.

In most cases, I would recommend a weight loss rate of 0.5 – 1.0% of body weight per week. For severely overweight or obese individuals, a higher percentage of ~1.0 – 2.5% can be used without too many negative consequences.

Since you've stumbled on this article, I'm going to assume you're concerned with muscle loss. Studies show that losing weight at too fast of a rate won't necessarily lead to any more fat loss, but substantially more muscle loss, especially in lean individuals.

I.e., the more fat you have to lose, the more aggressive you can be with your diet without risking much if any, muscle loss.

The same argument can be made if you're looking to put on muscle. After a specific rate of gain, the weight you're gaining is no longer muscle, but fat, you'll have to diet off later.

You can read more on how to bulk on keto to make sure you're gaining muscle without putting on un-necessary amounts of fat. While fat loss is a much quicker process, we still have to be reasonable with our rate of loss to minimize losing that hard-earned muscle we worked for.

My general recommendation is to eat as much as you can while still losing fat. Using this method may take longer to reach your desired goal, but you'll probably feel much better, retain more muscle, and get to do it while eating more food.

Somewhere, at some point in time, the myth emerged that to get “toned” you needed to lift lighter weights for higher reps. While there is a time and place to lift lighter, doing so while attempting to lose fat and retain muscle is not one of them.

Studies show that you can reduce volume by up to 2/3 and maintain strength and muscle mass, but if you maintain intensity. When referring to intensity, I mean weight on the bar and reps in reserve (RIR).

Reps in reserve are just a way of quantifying how close or far you are from failure in a given set. For example, with an RIR of 2, that would mean you were two reps shy of failure, and when I say two reps from failure, I mean two reps if I had a gun to your head two reps.

While you don't have to take every set to failure, with reduced volumes, one may argue that you should take most sets pretty near or close to failure (~1 – 3 rir) as a way to ensure sufficient stimulus for muscle retention.

Additionally, I'd like to mention that you can potentially use this same strategy with “lighter” weights. Research suggests that you can cause sufficient stimulus for muscle growth with sets up to 30 reps.

Again, with enough intensity (RIR in this case), lighter weights can be used.

Once you've become keto-adapted, the metabolic state of ketosis sets in motion a series of adaptations to minimize body protein losses during periods of caloric restriction.

If you maintain sufficient protein intake, diet at a moderate pace, and train with intensity, then you shouldn't lose any muscle while on a ketogenic diet. If you need help putting all the pieces together, I wrote up The Best Damn Keto Weight Loss Guide On The Internet.